What you possibly didn't know about David, that :

* he was born, David White in Edmonton, North London in 1940 at the time of the German bombing blitz of London during the Second World War, along with a twin brother who died in childbirth.

* grew up in a working class family with his father a porter in Billingsgate Fish Market and his mother a charlady cleaner and at school developed a defence against bullies by making them laugh, took on the lead role in a school play as a stand in and joined the local Amateur Dramatic Society.https://www.youtube.com/watch?v=Tm-eGlrI0tc

* left school wanting to follow in his older brother Arthur's footsteps as an actor, but deferred to his father's wishes to first 'get a trade' and worked for six years  as an electrician, before becoming a jobbing actor and later claimed to have changed his name to 'Jason' as a homage to his childhood fictional hero from 'Jason and the Argonauts'.

* started his tv career in 1964, at the age of 24, playing Bert Bradshaw in the series 'Crossroads' and in 1967 played a spoof super-hero, 'Captain Fantastic' in the children's tv comedy series, 'Do Not Adjust Your Set' along with my yesterday's birthday old boy, Terry Jones and  Eric Idle and Michael Palin. http://www.youtube.com/watch?v=t0kk8Dvzhuo 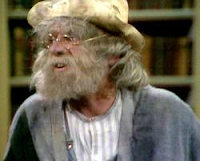 * in 1969 was recruited to appear in 'Hark at Barker' as Dithers (right0, the hundred-year old gardener.and 4 years later junior employee Granville (left) in 'Open All Hours' starring Ronnie Barker as the miserly proprietor of a corner shop and featured in Ronnie's prison based comedy, 'Porridge', as the old man Blanco. 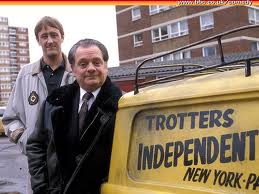 * in 1981, found his most enduring and popular role as Del Boy Trotter in the situation comedy 'Only Fools and Horses' https://www.youtube.com/watch?v=63rcdLeXiU8  as a London wide-boy making a dubious living trading in shoddy, stolen, and counterfeit goods, a role in which he  popularised the mild insults 'dipstick' and 'plonker' and the celebratory 'lovely jubbly' and one in which his portrayal of the elder brother to Rodney produced classic comic scenes and touching serious moments.

* went on to play Sidney, 'Pop' Larkin (right), in the rural idyll 'The Darling Buds of May'  based on the H.E.Bates novel, which also featured the then unknown Catherine Zeta Jones as his daughter Mariette. https://www.youtube.com/watch?v=aKM_tkofUhs 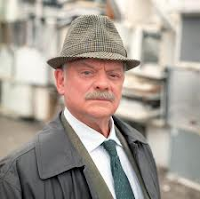 * in 1992, signed a golden-handcuffs deal at ITV to star as Detective Inspector Jack Frost  in the long-running series 'A Touch of Frost' which he finished with a two-part finale at the age of 70 in 2010. http://www.youtube.com/watch?v=FsX1C9T2yHg 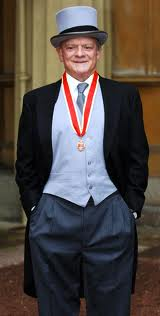 * in 2005, was knighted by the Queen for services to acting and comedy with British newspapers using the headline "Arise Sir Del Boy" or similar, in reference to his most famous role.


P S.
My earlier post about 'Only Fools and Horses' :
http://britainisnocountryforoldmen.blogspot.co.uk/2010/09/britain-is-country-of-old-men-who.html

and its scriptwriter, the late John Sullivan :
http://britainisnocountryforoldmen.blogspot.co.uk/2011/04/britons-say-goodbye-to-john-sullivan.html