Things you possibly didn't know about Stuart, that :

* he was was born in Leytonstone, East London in 1914, the first year of the First World War, where it was assumed that he would follow in the footsteps of his father, an insurance broker, but showed artistic leanings from an early age and said : "At school, if I did paintings, they were the ones that would be put on the wall." 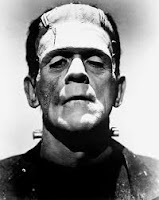 * became an enthusiastic cinemagoer, drawn to horror films starring Lon Chaney and Boris Karloff (left), whose monstrous faces he would recreate on himself.

* took on various jobs to help pay for the expensive and increasingly sophisticated makeup experiments conducted by night and sent photos of his efforts to film studios and when no replies were forthcoming, would visit in person, only to be ejected from the premises.

* at the age of 21 in 1935, sent evidence of his work to Alexander Koda's newly founded Denham Studios and was hired and trained by noted makeup artist, Guy Pearce and said that he "never stopped from that moment" with makeup for stars of every stripe from Vivien Leigh and Anna Neagle to Marlene Dietrich and Charles Laughton. 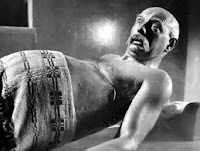 * worked on period dramas, perfected his use of ageing makeup and modified Hollywood bald-caps and in 1939 trained as a fighter pilot at the start of the Second World War, but returned to the studios after being diagnosed with haemophilia. 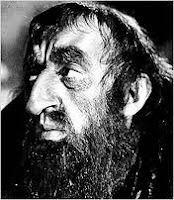 * built the pot belly worn by Roger Livesey in Michael Powell and Emeric Pressburger's, 'The Life and Death of Colonel Blimp' in 1943
https://www.youtube.com/watch?v=82WmdT76Cpc
and had his first on-screen credit in 1946 with the wartime thriller, 'I See a Dark Stranger', starring Deborah Kerr as an Irish woman spying for the Nazis.

* became widely known in 1948 as a result of his highly controversial makeup for Alec Guinness as the criminal, Fagin, in 'Oliver Twist', where his extravagantly hooked nose led to accusations of antisemitism and was shocked by the vehement protests which prevented the film from being shown in Berlin, saying that he was half Jewish and claimed that he and director Lean had experimented with a more modest nose during makeup tests, but the results had caused the character to resemble Christ.https://www.youtube.com/watch?v=pigmgUCxg_0

* created his greatest innovations in 1968 when Kubrick sent him the script for '2001: A Space Odyssey', promising "five to six months' work" which turned into several years and presented him the challenge to produce the extended 'dawn of man' sequence of apes foraging and fighting.https://www.youtube.com/watch?v=ML1OZCHixR0

* created ape bodysuits which allowed them to communicate fluidly through gesture and for facial movement, came up with an early animatronic technique which allowed them to snarl and a supply of milk to some actors' ape costumes to allow them to feed the real baby chimps in their arms and created the extreme ageing makeup for actor Keir Dullea in the devastating final sequence.
https://www.youtube.com/watch?v=AXS8P0HksQo 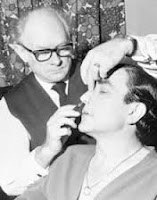 * worked on 'Murder on the Orient Express' in 1974 where he applied a false nose to Albert Finney (right).

* working for George Lucas on 'Star Wars' in 1977, designed the costume of Chewbacca and the ghoulish clientele of the cantina, where a bulb-faced band played for the amusement of men with porcine snouts and loitering in the murk was the bounty hunter Greedo, who resembled a cross between a mouse and a lychee.https://www.youtube.com/watch?v=3Zd_khk6zXo

Jedi' and apparently based Yoda on a combination of Albert Einstein and himself as the wizened sage. 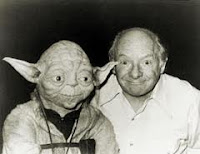 So "Farewell" Stuart and thanks for all the fun through your many deceptions,

* talked about his career : https://www.youtube.com/watch?v=_OwG73y6NTk