Britain is no country for and says "Farewell" to an old classical, religiously inspired composer called John Taverner

John, who was born during the Second World War, has died at the age of 69 and will be remembered for his 'Song for Athene', at Diana, Princess of Wales's funeral in 1997 and provided a lightning conductor for the grief of the watching millions. 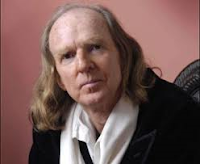 Alleluia. May flights of angels sing thee to thy rest.

Alleluia. Remember me, O Lord, when you come into your kingdom.
Alleluia. Give rest, O Lord, to your handmaid, who has fallen asleep.
Alleluia. The Choir of Saints have found the well-spring of life and door of Paradise.
Alleluia. Life: a shadow and a dream.
Alleluia. Weeping at the grave creates the song: Alleluia. Come, enjoy rewards and crowns I have prepared for you.
Alleluia.
http://www.youtube.com/watch?v=ezuIDtL6ydg

* was born in Wembley Park, London, to Presbyterian parents, who ran a family building firm, gave him a religious upbringing and nurtured his musical talents with him composing and studying the piano and gaining a music scholarship to Highgate School, North London.

* was profoundly affected by a performance of Mozart's, 'The Magic Flute', the only opera he thought transcended western tradition and studied for a time with the pianist Solomon (right), before entering the Royal Academy of Music.

http://www.youtube.com/watch?v=pTlnmZnXbUk  with its mix of electronics, football rattles and even a whip and based on the biblical story of Jonah, bring him public attention when premiered in the London Sinfonietta's 'Inaugural Concert' and released on the Beatles Apple record label in 1970.

* of his relationship with the Beatles said : "I was less surprised at John Lennon's enthusiasm, but I was surprised at Ringo's," and became the only classical composer of his generation with his luminously thin figure, flowing hair and otherworldly stare, to approach pop-star fame.

* in 1971, saw Apple release 'Celtic Requiem', http://www.youtube.com/watch?v=3-uwNLylDuQ with its Irish folk tunes, electric guitars and children's songs and the themes of preoccupation with death, fall from grace and loss of childhood innocence and the transition from darkness to light and had the good fortune, when Benjamin Britten heard it, recommend him to the Royal Opera and bring him an opera commission at the age of 27.

* converted to the Russian Orthodox Church, which he said, filled him with a sense of "homecoming" and in his works from this period, 'Kyklike Kinesis', 'The Immurement of Antigone' and 'Palintropos', sought a voice which could combine Orthodox beliefs with creativity which culminated in the 'Akhmatova Requiem' in 1981.

* in 1980, at the age of 36, suffered a stroke which left him partially paralysed for a time and not expecting to compose again and when he did, produce a rare secular work, 'To a Child Dancing in the Wind' in 1983, set to a poem by W.B.Yeats, dealing with the loss of childhood innocence http://www.youtube.com/watch?v=QMwod1jTGyY and in '84 unified his faith with his music in 'Ikon of Light'..
http://www.youtube.com/watch?v=zhKeEt0o0B8

* created 'The Lamb' in 1982, in a choral setting of William Blake. http://www.youtube.com/watch?v=IYpVGBSS65o

* suffered a devastating blow at the age of 41, with the death of his mother in 1985, but was given hope at the shrine of St Nektarios on the island of Aegina, south of Athens and began work on 'Eis Thanaton', set to 'Ode to Death' by Greek poet Andreas Kalvos. http://www.musicsalesclassical.com/composer/work/8508#

* in 1989 his preoccupation with Man's exclusion from the state of paradise informed his colossal, two-and-a-half-hour work, 'Resurrection' and its pendant work, the string quartet, 'The Hidden Treasure'. http://www.youtube.com/watch?v=4pumkQ40ez0

* had adopted Mother Thekla, Abbess of an Orthodox monastery on the Yorkshire Moors, as his spiritual mentor, collaborator and adviser until, in 2003, when his increasing interest in a more universalist philosophy, led to a breakdown in their friendship.

* in 1990 at the age of 56, was diagnosed with a hereditary condition, 'Marfan syndrome' and remained in a critical condition for some time after an operation, but nonetheless, continued work on 'The Apocalypse', a massive work for soloists, chorus and orchestra, which at one time he thought might be his last. http://www.youtube.com/watch?v=Ce1bvAu8s60

* at the age of 57, in 1991, married Maryanna Schaefer and moved from the house where he had been born to Sussex. and used Greece as an increasingly important refuge and a haven for composing, returning to opera the following year with 'Mary of Egypt'.

* in the 'Requiem' in 2008 for cello, soloists, chorus and orchestra, drew on texts from Sufi poetry, the Catholic Mass, the Koran and Hindu words from the Upanishad and explained that "the essence of the Requiem is contained in the words 'Our glory lies where we cease to exist' " and it was a story about a "journey" and becoming "one with God".

* at rehearsals, before the premiere of 'Sollemnitas', suffered a heart attack and spent months in intensive care and living in a new world of constant pain and shortness of breath said that it was "a kind of ecstasy, in a way. Having pain all the time makes me terribly, terribly grateful for every moment I've got."

* last year produced 'The Death of Ivan Ilyich' and said he felt particularly proud of the piece, based on Tolstoy's novel and as an epiphany of pain transfigured into music.

Once said :
"I wanted to produce music that was the sound of God. That's what I have always tried to do." 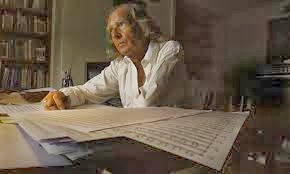