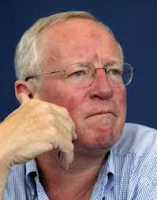 Robert was born 67 years ago in Maidstone, Kent less than 10 miles away from where I now live. He's been Middle East correspondent of 'The Independent' for more than twenty years, primarily based in Beirut and holds more British and International Journalism awards than any other foreign correspondent. Robert has, in fact, lived in Beirut for the last 37 years, so in a sense, Britain has been no country for him for some time, but it is particularly so at this time of year and his article in his paper today was entitled :

Poppycock – or why remembrance rituals make me see red

He referred to the remembrance poppy, used since 1920 to commemorate soldiers who have died in war and inspired by the First World War poem, 'In Flanders Field' and the fact that the wild flowers grew and the battlefields where so many young British soldiers died in Belgium fighting the Germans in the First World War. Today, small artificial poppies are sold by the Royal British Legion and the money raised used to support British military personnel past and present.

* was, on a brief visit to London, appalled to notice that tv presenters, politicians and dignitaries have resorted to stereotype by wearing 'those bloody poppies again' and questioned how this 'fashion appendage – inspired by a pro-war poem, for God’s sake, which demands yet further human sacrifice – still adorns the jackets and blouses of the Great and the Good?'

* at school, used to wear a poppy as did his Dad, who was a soldier of that Great War, in the trenches of the Third Battle of the Somme, 1918 and at Cambrai.

* remembered that, as his father grew older, became sick and read the biographies of 'that most meretricious of officers, Earl Haig – butcher Haig of the Somme, whose wife gave her name to the original poppies', came to regard the wearing of these 'sickly and fake petals as hypocrisy' and stopped wearing the poppy, as did he.

* recalled that at Ypres four years ago, was honoured to give the 'Armistice Day Lecture' just before 11 November, but did not wear a poppy and 'politely declined to lay a wreath at the Menin Gate – that “sepulchre of crime” as Sassoon called it.'

* asked if there is 'some better way to remember this monstrous crime against humanity?' because, in the original poem of Toronto doctor, John McCrae's : 'the poppies were there to remind us of our duty to kill more human beings' with the words : ' In Flanders fields, the poppies blow / Between the crosses, row on row– but then his dead soldiers exhort the living to “Take up our quarrel with the foe…/ If ye break faith with us who die/ We shall not sleep, though poppies grow/ In Flanders Fields." '

* suggested that instead we read the last words of Nurse Edith Cavell, before she was shot in Brussels by the Germans for rescuing Allied soldiers behind enemy lines : “But this I would say, standing in view of God and eternity, I realise that patriotism is not enough. I must have no hatred or bitterness towards anyone” and cast poppies aside.

Robert's article in the Independent :
http://www.independent.co.uk/voices/comment/poppycock--or-why-remembrance-rituals-make-me-see-red-8927751.html

My earlier posts about the War :

Monday, 14 November 2011
Britain is still a country with a few old men who lost their fathers in the First World War

Britain, once a country enthusiastic for war, thought it had said "goodbye" to it at 11 o'clock in the morning on the 11th of November 1918
http://britainisnocountryforoldmen.blogspot.co.uk/2010/11/britain-was-once-country-enthusiastic.html

My post dealing with my mother's family in the War, photographed here in 1914 with her 16 year old brother, George, in uniform and my mother holding the studio flowers. 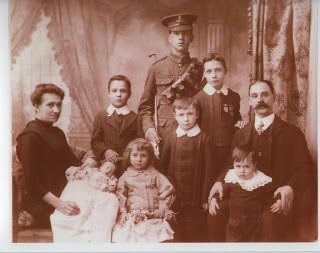