John Cole, once the BBC's political editor, has died at the age of 85 and along with millions of other old Brits, I remember him covering and guiding us though the major stories during the Margaret Thatcher era in the 1980s.

* was born in Belfast in 1927 where his father was an electrical engineer into where a Protestant unionist family and started his newspaper career when he joined the 'Belfast Telegraph' after leaving school, the Belfast Royal Academy, at the age of 17.

*worked as a reporter and industrial correspondent, then as a political reporter for his paper and gained a scoop when he interviewed then Prime Minister, Clement Attlee who was holidaying in Ireland.

* moved to England and the 'The Guardian', then based in Manchester, at the age of 29 in 1956, reporting on industrial issues and transferred to the London office in 1957 as 'Labour Correspondent' and appointed 'News Editor' at the age of 35 in 1963, took on the task of reorganising the paper's amateurish system for gathering news.

* headed opposition to a proposed merger of The Guardian' with 'The Times' in the mid-1960s, served as Deputy Editor and in 1975, failed to secure the editorship for reasons which may have included his commitment to the cause of unionism in Northern Ireland and what was seen by some as 'inflexibility' and a 'lack of flair'.

* joined 'The Observer' as Deputy Editor and remained for six years until, in 1981 he got a call from the BBC offering him the job of Political Editor and said : "The invitation to have a ringside seat for what must be the most fascinating period in modern politics was irresistible." and "us modern Presbyterians don't believe in predestination, but on this occasion I thought I'd give it a whizz." 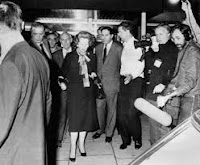 * had little previous television experience, but proved to be a natural broadcaster and became a familiar figure on tv and radio but was put under strain by the workload and he suffered a heart attack in 1984.

* returned to work and covered the IRA bombing of the Brighton Hotel and got the memorable interview with Prime Minister Thatcher on the pavement in its immediate aftermath, in which she declared that the Tory conference would take place as normal and some years later was one of the first to forecast her resignation in 1990.

* was held with affection by tv viewers, trusted by politicians and known for speaking in the language used by ordinary people rather than 'Westminster experts', articulating the viewpoint of the ordinary man or woman in the street.
http://www.youtube.com/watch?v=gqCskMPUOaM

* with his distinctive Northern Irish accent found himself lampooned by the magazine 'Private Eye' and as a puppet in tv's 'Spitting Image', but also led the way for BBC broadcasters with regional accents.

* retired as the BBC's Political Editor at the age of 65 in 1992 and saw 1995 memoir, 'As It Seemed To Me,' become a best-seller and at the age of 79 and in 2007, wrote an article for the 'British Journalism Review' in which he blamed politicians and the media for the fact that parliamentarians were held in such low esteem and was particularly scathing of Alastair Campbell's influence during Tony Blair's premiership.

Prime Minister, David Cameron : a "titan at the BBC" and an "extraordinary broadcaster."

Labour Party leader, Ed Miliband : "my generation grew up watching John Cole. He conveyed the drama and importance of politics."

Former Prime Minister, John Major : "John Cole was one of the finest political correspondents of my lifetime, and a real credit to his profession. When John spoke, everyone listened. He was always well-informed, balanced - and trustworthy - and set the bar very high for all who followed."

Nick Robinson, who followed as the current BBC political editor : he "shaped the way all in my trade do our jobs."

Veteran BBC broadcaster John Humphrys : "The thing about John was people really liked him. That sounds almost silly and trivial for someone doing his job, but he broke through and that's incredibly important. People related to him as a warm and decent human being. They could see he was a decent man. His humanity was there and it came across. In the end it doesn't matter how brilliant a hack you are, if people can't relate to you then you don't succeed."