Britain is no longer a country for and says "Farewell" to a brilliant, self-effacing scientist and twice-over Nobel prize winner, called Fred Sanger

Fred, who has died at the age of 95, was one of only four people to have won the highest honours in science, the Nobel Prize twice, placing him in the company of Marie Curie and the only person to have won twice in chemistry.
Professor Colin Blakemore, former Chief Executive of the Medical Research Council, said of him : 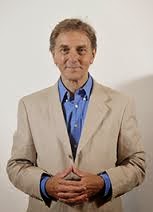 "The death of a great person usually provokes hyperbole, but it is impossible to exaggerate the impact of Fred Sanger's work on modern biomedical science. His invention of the two critical technical advances – for sequencing proteins and nucleic acids – opened up the fields of molecular biology, genetics and genomics."

What you possibly didn't know about Fred, that he :

* was born in Rendcomb, Gloucestershire, just before the end of the First World War in 1918 and at five, moved with his family to a small village in Warwickshire, was taught by a governess and brought up in the Quaker religion by his father who had been an Anglican medical missionary in China who converted to Quakerism and who, as a medical doctor encouraged his interest in biology.

*  at nine was packed off to the Downs School, a boarding school run by Quakers near Malvern and at 14 to the new liberal Bryanston School in Dorset, where he liked his teachers and particularly enjoyed scientific subjects. 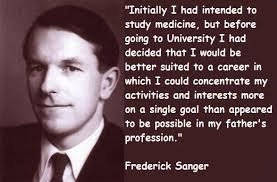 * at the age of 18 in 1936, won a scholarship to study science at St John's College, Cambridge and was attracted to biochemistry by the excitement for the subject shared by the young members of the department working under Frederick Gowland Hopkins, the Nobel prizewinner who had discovered vitamins.

* experienced  the loss of both parents dieing from cancer during his first two years at Cambridge, where he was a pacifist and member of the 'Peace Pledge Union' and the 'Cambridge Scientists' Anti-War Group' where he met his future wife, Joan, who was studying economics at Newnham College.

* graduated at the time of the outbreak of the Second World War in 1939, was excused national sertvice and as a conscientious objector and given permission to study at Cambridge dividing his time between studying for a doctorate and carrying out research into nitrogen uptake in potatoes.

* over the next decade, worked on the chemical structure of proteins and developed methods to determine the building blocks of the hormone, insulin, something thought impossible and which led to the first of his Nobel prizes in 1958.

* provided an essential step for the laboratory synthesis of insulin and a major advance in the treatment of diabetes and opened a floodgate of research into the way hundreds of proteins, which he referred to as 'the machinery of living matter', conspired to create and sustain a living organism. 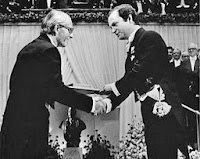 * in 1962, at the age of 44, moved to the new Medical Research Council Laboratory of Molecular Biology along with Nobel laureates Max Perutz and Francis Crick and began working on the problem of sequencing DNA, developed the 'Sanger sequencing' method to read DNA code and awarded a share of the Nobel prize for chemistry by the King of Sweden in 1980.

*  didn't court fame, describing himself as "a chap who messed about in his lab" and rejected a knighthood because, as he told a journalist in 2000, he did not care to be called "Sir" and  "a knighthood makes you different, doesn’t it, and I don’t want to be different."

* retired at the age of 65, in 1983, to devote time to his garden, exchanged his laboratory bench for one of a cabinetmaker and messed about on the river.

* was honoured when the Wellcome Trust named the 'Sanger Centre' after him but only agreed after warning the founding director "It had better be good.", opened it in person in 1993 and saw it become Britain's home for the 'International Human Genome Project' and saw his work pave the way for the identification of the first complete human genome sequence published in 2003.

* in 2007 the British Biochemical Society was given a grant by the Wellcome Trust to catalogue and preserve the 35 laboratory notebooks in he recorded his research from 1944 to 1983 and in reporting this. 'Science' noted that he was "the most self-effacing person you could hope to meet", was now spending his time gardening at his Cambridgeshire home.

* said he found no evidence for a God and so he became an agnostic and told the 'Times' in 2000 : "My father was a committed Quaker and I was brought up as a Quaker, and for them truth is very important. I drifted away from those beliefs – one is obviously looking for truth, but one needs some evidence for it. Even if I wanted to believe in God I would find it very difficult. I would need to see proof."