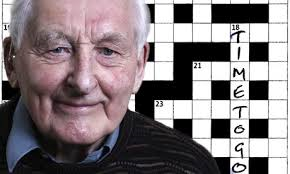 John, one of the most admired and best-known crossword setters in the English language, known for his idiosyncratic style and extended anagrams compiled crosswords for the 'Guardian' for over 50 years, better known to readers by his pseudonym, 'Araucaria', has died at the age of  92.

In a crossword in January he announced to his loyal cruciverbalists or solvers that he was dying from cancer. 'Araucaria', he said, 'has 18 down of the 19, which is being treated with 13, 15' which translated into  'cancer',  'oesophagus' and  'palliative care' with the solutions to  other clues being : 'Macmillan', 'nurse', 'stent', 'endoscopy' and 'sunset' and when asked why he had decided to reveal details of his illness in a crossword ? said: "It seemed the natural thing to do, somehow."

* was one of a family of six children who in the 1920s found their entertainment in wordplay, charades and puzzles and would share the 'Times' crossword with his parents and brothers and sisters, who together would also engage in cryptic word play and in setting simple puzzles.

* was brought up in academic Oxford, where his father was the Dean of Oriel College and later Principal of Cuddesdon Theological College and then Bishop of Brechin and he himself, after leaving school, read classics at King's College, Cambridge, till the age of 19 when the Second World War intervened in 1939.

* took a pacifist position at the start of the War but changed his mind and later said : "I thought to myself then, if I'm going to fight, I must do the nastiest job I can think of, in terms of killing people, and the best way to do that is to be a bomber pilot. I finished up as the person who drops the bombs, not the pilot – an observer, they were called in those days." 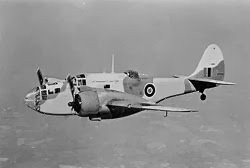 * joined the Royal Air Force in 1942 at the age of 22, flew in 30 'night-intruding' operations in Baltimores and Bostons over Italy and forced to bale out, went into into hiding from the Germans, finding refuge with an Italian family, who hid him in a stable and took Italian lessons from a school teacher billeted with the family and in return taught her English and Latin.

* was rescued by the Americans and got 'mentioned in dispatches', an honour which he played down saying  : "you always got, if you baled out and the enemy did not catch you".

* went back to King's College after the War, to read theology, was ordained in the Church of England in 1948, then worked in a succession of curacies and chaplaincies including Reading University in the 1960s and later St Peter's in London's Eaton Square.

* in 1958, on the strength of  success in winning the Observer's crossword setting competition two years running, was taken on by the then Manchester Guardian as one of its small band of crossword setters with his first clue in his first puzzle setting the standard for what was to follow: 'Establishment cut to the bone? (8,5)' for 'skeleton staff'.

*  found that composing newspaper crosswords, which started as a sideline became a necessity at the end of the '70s, when loss of income resulted from his divorce which meant he had to give up his church living.

* chose Araucaria as his 'nom de plume' since it was the botanical name for the monkey puzzle tree and 'monkey' had been a term of endearment in the Graham family.

* evolved the artform of the cryptic crossword, produced themed puzzles on topics such as the 'British shipping forecast' and the '250th anniversary of the death of Bach' and invented the 'alphabetical jigsaw puzzle'.

* had his last puzzle for the Guardian, published with the clue : 'Warning not to outstay welcome I encountered in African country (4,2,2)' was: time to go and the solutions to other clues as :  'second wind', 'nil by mouth' and 'cottage hospital.'

*  held his final living was as rector of Houghton and Wyton in Cambridgeshire and donated his oesophagus for research to the MRC Cancer Unit at Cambridge University.

* was the master of the very long anagram and was proud of  'O hark the herald angels sing the boy's descent, which lifted up the world' which translated into 'while shepherds watched their flocks by night , all seated on the ground'.

Letters in the Guardian today expressed his followers sense of loss and celebration of the joy he had given them.

Paul and Vicky Faupel who lived in his village of Somersham in Cambridgeshire wrote :
'Learned, erudite, eloquent, witty and self-effacing about his sharp-minded crossword-setting skill – he was all of those and more. He will be long remembered and sadly missed by us all.'

Professor David Stephens :
'Warm summer days on the beach, Dad with the Guardian crossword firmly on his lap, Christmas specials and the call from the lounge, "just one clue left!". All was right with the world. Farewell, Araucaria, and thank you.'

John Purkiss :
'For my 80th birthday last year, my family commissioned a killer-grade personal crossword – my life in a crossword. Never has a gift brought such pleasure. It took me two days to complete except for one last clue which took 10 days! I feel I have lost a friend of some 30 years.'

Brian Booth :
'If, on opening the Guardian on a Saturday, I punched the air and yelled "Yesss!", my wife knew what that meant: an alphabetical.'

Wal Callby :
'Will never forget laughing out loud when I got 'Over-complicated way to say "were you our teacher?" Answer : 'Tortuous'.

Marion Bolton :
'My favourite clue was 'Excellent host, or absent-minded pet owner (4 7 3)'. 'Puts himself out'.

Journalist, Simon Hoggart in his tribute in the Guardian wrote :

'There could be few greater satisfactions than doing battle with that warm, nimble, generous yet invariably cunning mind. And he was loved. Yesterday a colleague in Parliament, a crossword fan himself, said bleakly to me, "He's dead!" and had no need to explain who he meant.'
.
'He gave great entertainment to a great many readers for more than half a century and inspired a younger generation of crossword setters.'

'John was also one of the gentlest, kindest and most diffident men I have ever met.'