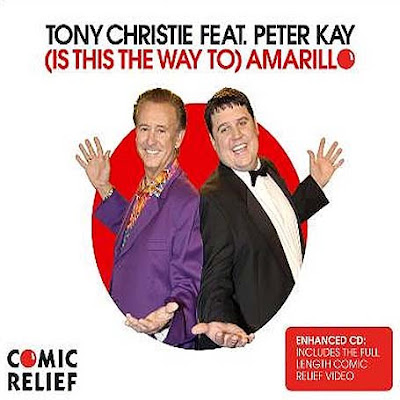 'Is This the Way to Amarillo ?' is a song written by Neil Sedaka and Howard Greenfield, referring to the town of Amarillo in the State of Texas. It is about a man travelling there to find his girlfriend. The reason that 'Amarillo' was chosen for the song was because it was the only place name that Sedaka could think of which rhymed with 'willow' and 'pillow'.

The song was recorded by Tony Christie and released in the UK in 1971, initially reaching number 18 in the UK Singles Chart. However, it was much bigger hit across Continental Europe, notably in Germany and Spain where it made number one.

In Germany, the song's chorus is widely adapted as a chant by football and hockey fans even today. Following its re-issue in 2005, when it reached 'number one' in the UK, the song gained even greater popularity.

In 2006 it was played at the World Cup Final in Berlin and was also played by The Central Band of the Royal British Legion on Centre Court at Wimbledon before the start of the Men's Singles final.

When the day is dawning,
On a Texas Sunday Morning,
How I long to be there,
With Marie who's waiting for me there.

Every lonely city,
Where I hang my hat,
Aint as half as pretty,
As where my baby's at.

Is this the way to Amarillo?
Every night I've been hugging my pillow,
Dreaming dreams of Amarillo
And sweet Marie who waits for me.

Show me the way to Amarillo,
I've been weeping like a willow,
Crying over Amarillo
And sweet Marie who waits for me.

There's a church bell ringing,
Hear the song of joy that it's singing,
For the sweet Maria,
And the guy whos coming to see her.
Just beyond the highway,
There's an open plain and it keeps me going,
Through the wind and rain.

Peter Kay in the television studio :