Who are the real baby boomers ? 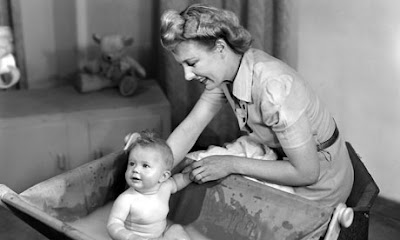 Earlier this month, the Guardian newspaper published an article by Caroline Davies
entitled :
'We should be so lucky. The 1948ers who had it all : sex,drugs, music and a pension'.
In the article she mistakenly calls those born in 1948 'the original baby boomers'. They were not, since they were conceived in 1947 or early 1948. The War in Europe came to an end on May 7th 1945. The true 'baby boomers', those whose conception had been postponed because of the War, began to kick and scream their way into the World in 1946 and 1947, not 1948.

I know that I am a true baby boomer. I was born in the Summer of 1947 and therefore conceived in the Autumn of 1946. My elder brother, on the other hand, was born in 1939 and lived through the War as an only child because my parents postponed another birth. He was 8 years old when I was born.

Apart from that mistake Caroline's article was interesting and everything she mistakenly attributed to the 1948ers applied to us.

* Family allowance, introduced in 1945, put clothes on our backs.

* She omits to say that new universities were built to handle the bulge of the true baby boomers.

As we entered adolescence, 'The Who' really did sum up some of the thoughts of my generation, even though Daltry and Townsend were not baby boomers, having been born in 1944 and 1945 :