Britain is no longer a country for old war veterans : Part Two

A Second World War hero has been banned from selling 'Remembrance Day' poppies after raising £140,000 over 50 years, because he is too old and needs insurance.
D-Day veteran Harry Billinge, 84, has been collecting money for military charities every year for five decades.

Harry, president of a Normandy Veterans' Association and a Royal British Legion branch chairman, has been told this year must be his last, because he will be 'uninsurable' when he turns 85. Apparently, the British Legion have told him it would 'not be able to afford the cost of the insurance'.

Like a true Brit, Harry claimed he would like to "stick a bayonet up" whoever made the decision. "I fought the Germans on D-Day and many of my friends died protecting this country".

Also sad, is the fact that on 'Remembrance Day', this year, hundreds of D-Day veterans are to marched past the Cenotaph in London for the last time.

With the average age of survivors of the Second World War Normandy landings in 1944, now in the mid-80s, organisers said it would not be possible to stage the mass event for future anniversaries.

He praised the veterans, adding: " We would like to see as many people as possible in Whitehall to give these guys a final clap. They are such an illustrious, gallant group of men." 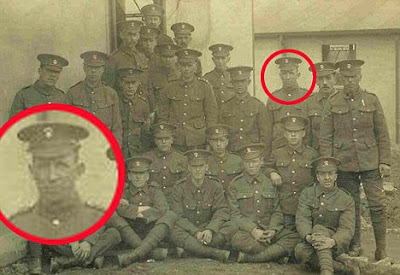 And lastly sader still,was the anger of a First World War veteran's family, after binge-drinking student was photographed urinating on poppy wreathes on a war memorial.

John Ievers, the Grandson of a First World War soldier who died at the age of 32 in 1917, said of the the 19 year old student who pissed on the wooden cross he had laid in memory of his grandfather : "I am annoyed - he's a drunken idiot. He should be made to clean the streets of Sheffield or do some kind of community service."

So, in some respects, Britain has become a sad old country.

Having said that, it is heartening to know that, it still a place where men like Harry Billinge live and for every 19 year student who has neither any concept of living in a 'wider society', nor any idea that their actions might cause offence, I acknowledge, that there are thousands of 'good kids', who do.

And from the wonderful T.V. Series about the 'Home Guard' in the Second World War called 'Dads Army' :