Britain is no longer a country for old war veterans : Part One 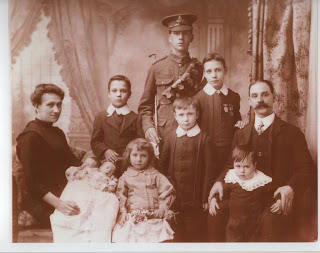 At the 'Remembrance Service' in Westminster Abbey held to pay tribute to the those who gave their lives in the 2 World Wars, for the first time, there were no old soldiers from the 1914-18 War.

There were 3 there last year, but each has since died.

The last was Harry Patch. Here he is recalling the 'Battle of Passchendaele'.
While it raged for 90 days, each day 3,000 British soldiers died.
It was an ocean of blood.

Above, is the family photo taken, I think, in 1914. From left to right, it shows my wonderful Granny, with the twins, Cecil and Cecilia on her lap.
They died shortly after this from the measles.They were 6 months old.

Next, came my Mother holding the flowers which were, 'studio window dressing' and taken from her after the photo was taken.

Then we have my 4 uncles, in their Edwardian suits and on the right, my stern Victorian Grandfather.

Dominating the photo, and probably the reason why it was taken, was the tall man in army uniform with a riding crop under his arm. He was my Uncle George and he was 16 years old.

He'd lied about his age and had signed up after a young woman had pinned a 'white feather', a sign of cowardice, in his button hole that year.

He'd immediately taken himself off to the local recruiting office, 'took the King's shilling' and entered his contract to join the British Army.

My Grandfather did not intervene.

At the time he was working with my Grandfather on a horse and cart, delivering jam jars for the Robinson Jam Company in Woolwich in South London. This explains why he joined a cavalry regiment.

Of course, with the use of 'trench warfare', he saw no action on horseback and spent the next 3 years in the trenches in Northern France. 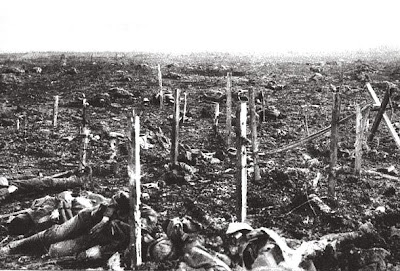 I can't imagine what horrors he experienced.

He was crippled by German poison gas at the end of the War in 1918 and returned home as an invalid in 1918. He was 20 years old and my Mother said that, " he looked like an old man."

The only First War veteran I really knew was a remarkable Welshman called David Parsons. He was studying History at Oxford when War broke out in 1914. He signed up and became an officer, a 'first-lieutenant'.

He didn't know it at the time, but His life expectancy in the trenches was 3 weeks.