Britain is still a place for the voice of Donovan 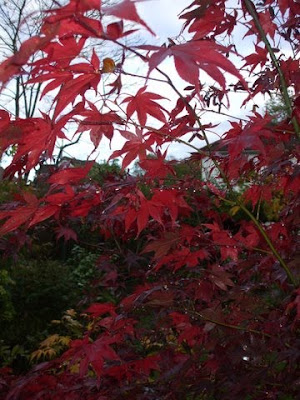 This autumn has been spectacular for its colour, apparently it's something to do with the chemicals in the leaves of trees. It would certainly match 'New England in the Fall'.
When I saw the raindrops on the leaves of the acer tree I was reminded of the words of the Donovan song, 'Catch the wind'.

In the chilly hours and minutes,
Of uncertainty, I want to be,
In the warm hold of your loving mind.

To feel you all around me,
And to take your hand, along the sand,
Ah, but I may as well try and catch the wind.

When sundown pales the sky,
I wanna hide a while, behind your smile,
And everywhere I'd look, your eyes I'd find.

For me to love you now,
Would be the sweetest thing, 'twould make me sing,
Ah, but I may as well, try and catch the wind.

When rain has hung the leaves with tears,
I want you near, to kill my fears
To help me to leave all my blues behind.

For standin' in your heart,
Is where I want to be, and I long to be,
Ah, but I may as well, try and catch the wind.

* He became a friend of leading pop musicians including Joan Baez, Brian Jones, Bruce Springsteen, and The Beatles, and was one of the few artists to collaborate on songs with the Beatles.

* He influenced both John Lennon and Paul McCartney when he taught them his finger-picking guitar style in 1968.

* His commercial fortunes waned after he parted ways with the producer, Mickie Most in 1969, and he left the music industry for a time.

* He continued to perform and record sporadically in the 1970s and 1980s, but gradually fell from favour. His gentle musical style and hippie image was scorned by the critics.

* He underwent a revival in the 1990,s Britain and late in the decade, he recorded an album with producer and long-time fan Rick Rubin.

The first link below gives the voice of that fresh-faced youth of 18and which I bought as a fresh-faced and, in love youth, of 17. It was a small vinyl record, a 45, and cost quite a lot of money, I think, 7 old shillings and 6 old pence.

The second, Donovan today, which I found, both poignant and moving. It brought a tear or two, to my old eyes.