Britain is no country for Churchill's English

When Winston Churchill was awarded the Nobel Prize for Literature in 1953, for his "m
astery of historical and biographical description" and his "brilliant oratory in defending exalted human values."
In the first volume of his autobiography, Churchill explained where, at Harrow School, he had developed this talent for language.
Here he was compelled to study English, because he wasn't considered bright enough to learn Latin and Greek.
He wrote :
'By being so long in the lowest form I gained an immense advantage over the cleverer boys. They all went on to learn Latin and Greek and splendid things like that. But I was taught English. We were considered such dunces that we could learn only English. Mr. Somervell, a most delightful man, to whom my debt is great, was charged with the duty of teaching the stupidest boys the most disregarded thing, namely, to write mere English.

He knew how to do it. He taught it as no one else has ever taught it. Not only did we learn English parsing thoroughly, but we also practised continually English analysis.

Mr. Somervell had a system of his own. He took a fairly long sentence and broke it up into its components by means of black, red, blue, and green inks. Subject, verb, object: Relative Clauses, Conditional Clauses, Conjunctive and Disjunctive Clauses!
Each had its colour and its bracket. It was a kind of drill. We did it almost daily.

As I remained in the Third Form three times as long as anyone else, I had three times as much of it. I learned it thoroughly. Thus I got into my bones the essential structure of the ordinary British sentence, which is a noble thing.

Naturally, I am biased in favor of boys learning English. I would make them all learn English: and then I would let the clever ones learn Latin as an honour, and Greek as a treat. But the only thing I would whip them for is not knowing English, I would whip them hard for that'.

I have a personal reason for remembering this piece of Churchillian writing, since on the morning of 25th January 1965, I read it from the lectern on the school stage to the assembled audience of 1,500 pupils.

You can see the lectern in the photo. It is in exactly the same position it was, on that morning 45 years ago. 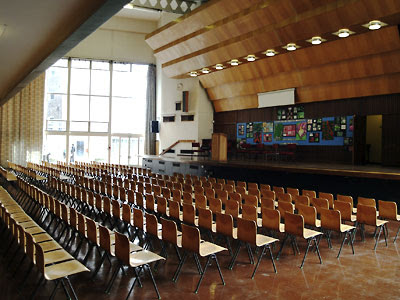 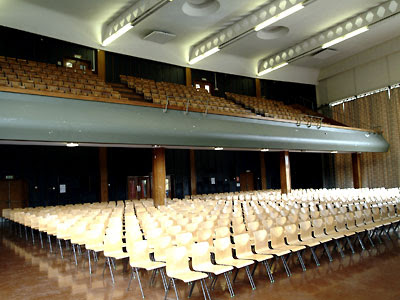 I was reading because, being a 'Senior Prefect', this was a 'duty'.

The passage chosen by the Headmaster was from 'Corinthians' in the 'Old Testament'.

I was word perfect and then the day before I was due to perform, Churchill died and the next morning the Head called me into his office, handed me Churchill's book and told me to read the pencilled in passage.

I left his office in horror. I would have no time to rehearse !

I mounted the stage filled with trepidation.
I was aware of my right leg shaking and was sure everyone of the 3,000 eyes fixed on me could see it.

I might have learnt 2 lesson in reading the lesson :
Don't bank on certainty.
Will yourself to do something and you might succeed.

About 10 years ago I observed a young secondary teacher with a class. She asked them : " What was them books, we was using last week ?"

Churchill's masterful use of the English language :