The 'Daily Mail' published an article called : 'Where have all the Guys gone? QUENTIN LETTS'S nostalgia for the fantastic Bonfire Night effigies of yesteryear'.

In the article he :
* Lamented the fact that guys were no longer burnt on bonfires on November the 5th.

* He said : ' Perhaps it's just me, but have you noticed something missing from our streets at this time of year? In the run-up to Bonfire Night, children in every town and village used to tour the streets with almost human figures, happily shouting 'Penny for the Guy!' - which they duly proceeded to burn at the stake (or rather, at towering infernos on the village green or local recreation ground)'.

* He went on to suggest that the Labour Government were to blame for the missing guys.

* Then followed some wonderful black and white photos of kids with their guys in the 1950's.

* He was good at this point, when he reminded me that the kids would shout, "penny for the guy" and collect money from passer -bys, in old jam jars or biscuit tins. This money, supposedly to go towards the cost of making the guy and building the bonfire, was probably spent on bags of barley sugar or sherbet lemons at the local sweet shop.

* He asserted that guys were : 'a celebration of the arrest and execution of Guy Fawkes and his fellow Papists in the Gunpowder Plot of 1605 and that an annual celebration, initially ordered by Parliament, was an act of defiance of terrorists and anti-parliamentarians. 'It was a tremendous assertion of pride in our House of Commons and in our Protestant faith. Guy Fawkes Night was a celebration of nationhood'.

All this prompted me to do a little research. Here is a woodcut print from 1605 : 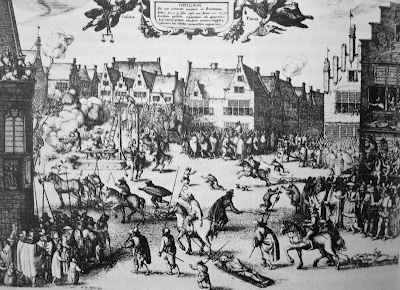 It shows the 3 stages of being 'hanged, drawn and quartered' in public, after being found guilty of plotting to overthrow the state - treason.

1. The plotters were dragged through the streets by horses. They were tied to wooden hurdles so that they could be subjected to the bile of the crowds and have stones thrown at them.

2. They were then hanged by the neck until half dead.

3. After being cut down, their stomachs were cut open and their entrails drawn out. These were then burned in front of them. They were not burnt at a stake.

4. Finally, the were cut into 4 by an axe, starting at the feet.

5. The 4 parts of their bodies were then exhibited in different parts of London and left until they rotted. The heads were staked on the old London Bridge.

6. Without a Christian burial, their souls would be tortured in Hell for Eternity.

So the burning of Guy Fawkes resonated with echoes from our barbaric past. I'm glad kids don't burn guys any more.

Quentin Letts could have written a far more interesting article if he had asked the question :
'Why did Robert Catesby and 12 other Catholic gentlemen attempt to blow up the King and the assembled House of Commons and Lords, knowing what would happen to them if the plot failed. Why did they risk so much in order to restore the True Catholic Religion?'

This question is all the more intersting in our world today, where similar religious fanatics are also willing to die for their cause and kill others in the process.P.S.
I remembered that Mel Gibson, playing the Scottish rebel, William Wallace had suffered the same ordeal as the Plotters in his film 'Braveheart'. Only 'google' it and watch it on You Tube if you have a strong stomach. No pun intended.