Britain is becoming a country of old 'Txgenerians' 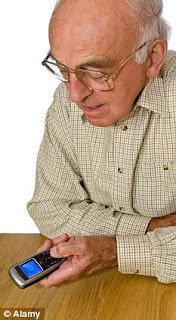 Apparently, a new study shows that pensioners are taking to text and e-mails to share their major news rather than newspaper announcements.


15% over the 65's surveyed said they preferred to used text messages to break news with friends and family. Of those, a quarter said they would rather use the medium to break bad news and half said sending good news, such as the birth of a child or an engagement, was acceptable by texting.

The pensioners, dubbed ' Txtgenerians', say the reasons for using the new technology ahead of a face-to-face meeting include the time it allows to compose thoughts and the ability to send news to more than one person at once.

"I've done my best to keep up to date with technology and I've found that if I want to get hold of my family easily, especially my grandchildren, that texting them seems to get the best response when they're busy. I haven't gone as far as sending photos or checking emails on my phone ,it's best to take it one step at a time, but I don't have a problem if they send me news on text."
Posted by ...............................JohnBoy at 11:26