Britain is a country of fewer and fewer old men who, when young, fought Japan in The Second World War 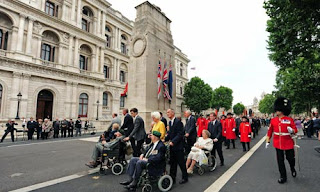 Those survivors of 'Far East Campaign' attended a Cenotaph Memorial Service to mark 65th anniversary of the end of the conflict.

It must have been very moving.

On the command of "march", they moved forward in their wheelchairs and past the Cenotaph.

They represented the dwindling number of soldiers from the conflict which took the lives of 30,000 British service personnel, including 12,500 in prisoner of war camps. 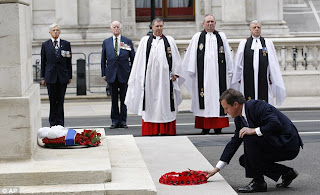 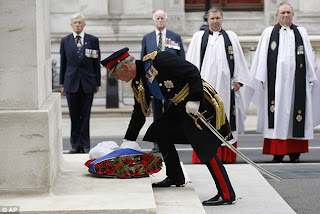 * Viscount Slim, the son of General Slim, Commander of the 'Commonwealth and Empire Forces', read the Kohima Epitaph, written following the Battle of Kohima near the border of Burma where 4,000 British troops and almost 6,000 Japanese troops died. He said : "When you go home, tell them of us and say, for your tomorrow, we gave our today."

* Prince Charles saluted and the Prime Minister stood head bowed in front of a rank of veterans bearing standards, including that of the Burma Star Association, which represents veterans of the War against Japan.

* A lone piper from the Scots Guard played a piece specially composed to commemorate Kohima before the service concluded with a reception for the veterans.

* Among the veterans was RAF serviceman Peter Proctor, 88, from who said :
"I think it's very important to keep the memory alive. They were the 'Forgotten Army'. When the war ended in Europe there were great celebrations, people were saying the war is over, but it was still going on in the Far East."

* Earlier, the Prime Minister said:
"They fought and suffered around the world in ferocious conditions ... They witnessed incomprehensible horrors. They lost their lives – and many were imprisoned. And they did all this for us – to protect the freedoms we all enjoy today."

The Fourteenth Army, was the largest ever assembled by the British Empire and Commonwealth numbering more than half a million men, 340,000 of whom were from India, 100,000 from Britain and 119,000 from the East and West African colonies.


Stephen Spielburg's 1987 film 'Empire of the Sun', was was based on the author J.G. Ballard's memories of life in a Japanese camp for civilians in the Conflict :
http://www.youtube.com/watch?v=Wv9rirLk2kA

David Lean's 1957 film : 'Bridge Over The River Kwai', dwelt on life in a Japanese prisoner of war camp :
http://www.youtube.com/watch?v=dzWRlTgEB5Q

The men sang these words in their head :

Hitler has only got one ball,
Göring has two but very small.
Himmler has something sim'lar,
But poor old Goebbels has no balls at all.

Labels: Old Soldiers from the war against Japan