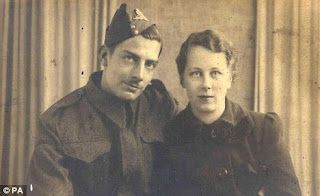 There was an article in the Daily Mail this weekend entitled :


'Murdered in a country that has betrayed its real heroes'

It centred on 90 year old Geoffrey Bacon, who was murdered returning to his modest flat in Camberwell where he was attacked from behind by a 'cowardly thug' who took £40 and his bus pass before punching him to the ground and locking the door behind him.
Here he is pictured with his wife Annie during the Second World War.

Now Daily Mail is a right wing paper with a right wing agenda and Geoffrey's 'murder' was made to serve that agenda.

One of the things we find out later in the article was that Geoffrey wasn't murdered at his flat, but died 11 weeks later and that his son Philip said his dad "died of a broken heart after injuries sustained in the attack".

However, being led to believe he had been murdered at his flat, we were told that :
* as the Spitfire and Hurricane fighters flew over London yesterday to mark the 70th anniversary of the Battle of Britain, they stirred many memories of the heroes, 'The Few', who changed the course of our history.

* in Camberwell, South-East London, an unsung hero of World War II was also being remembered by his devoted children, grandchildren and great-grandchildren.
Alas, not just for his selfless service during that war, but for the brutal way he was murdered.

* he had volunteered for secret missions behind enemy lines and was a driver for both Montgomery and Eisenhower.

* the killer may have been sleeping rough on the bench he had dedicated to his sweetheart and wife Kitty, from whom he had been inseparable.

At this point Geoffrey is brought back to life when we are asked to consider :
* who could have blamed him if, in his dying days, he wondered what he had fought for all those years ago?

We then we get the full blast of 'Dail Mail' rhetoric :
Was the sacrifice worth it to produce a country with an educational underclass so ignorant they wouldn't even know what the Battle of Britain was; so ambivalent about their past they have no respect for those who secured our future? A generation so drenched with a sense of victimhood and entitlement they think mugging an old man is a legitimate way of making a fast buck?

The article went on to tell us that 'the real tragedy is that you only have to pick up your local paper to see many more victims like Mr Bacon, elderly targets brutalised in their own homes because they make easy prey'.

It then cited the :
* 89 year old woman, murdered in her home in Essex.

* 67 year old man, attacked from behind, robbed and left to die in the street.

* 81 year old, fatally mugged for her handbag as she walked home at 8pm.

Of course, we have no way of knowing if any of these incidents are true.

Apparently :
* these were men and women who fought and worked and paid their taxes and struggled and raised their children. Who took care of their families and had pride in their communities. Unsung heroes all, betrayed at a time of their life when they had a right to expect safety, dignity and respect.

* as we remember the sacrifices of 'The Few', we should also say a prayer this weekend for the many, like Mr Bacon, who fought for a country they must now scarcely recognise. 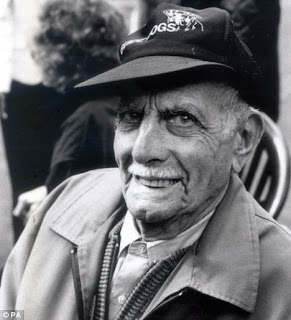