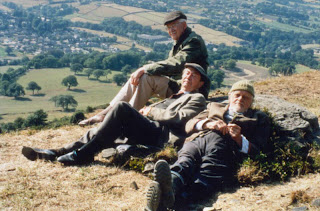 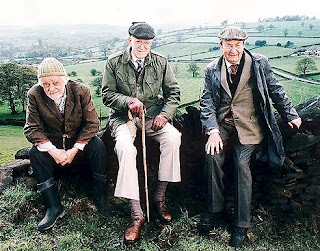 After 37 years and 295 TV episodes, that gentle sitcom : 'The Last of The Summer' was broadcast for the last time last night. It told the lives and friendships of 3 old men in the Yorkshire village of Holmfirth.

It's hard to believe that I was 26 years old when the first episode was broadcast all those years ago :

The Summer Wine's charm and beauty were in and from the characters and the Yorkshire landscape.

Here is a flavour of the characters :
http://www.youtube.com/watch?v=4KbONJHLqi0

In the last episode neither 'Nora Batty' in her ill-fitting hosiery, nor 'Compo', her wooley-hatted admirer shall make an appearance since they have long since died. However, 89-year-old Peter Sallis, still playing grumpy old Clegg was still there.

* in its 1980s heyday, the Sunday night TV institution which attracted audiences of 19 million.

* and still is, an enormously successful export for the BBC, showing everywhere from Arkansas to Afghanistan.

* filmed in Holmfirth, in West Yorkshire, where the show helped the town flourish after the end of its textile industry and busloads of fans visit the 'Last of the Summer Wine Museum' and either take refreshment in the 'Wrinkled Stocking Tea Room', or get their picture taken on 'Nora Batty's Steps'.
Posted by ...............................JohnBoy at 00:53

Labels: Last of the Summer Wine