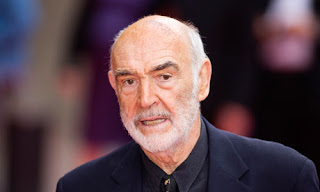 Things you probably didn't know about Sean, he :

* has been polled as 'The Greatest Living Scot,' and proclaimed 'Sexiest Man Alive' by 'People Magazine' and in 1999, at age 69, was voted 'Sexiest Man of the Century'.

* was born in Edinburgh where his Protestant mother was a cleaning woman and Catholic father a factory worker and lorry driver.

* left school and became a milkman delivering milk to doorsteps and then joined the Royal Navy and had two tatoos which read : 'Mum and Dad', and 'Scotland Forever'.

* was discharged on medical grounds and worked as a lorry driver, labourer, artist's model for the Edinburgh College of Art and a coffin polisher.

* helped out backstage at the 'King's Theatre' in 1951 and became interested in the proceedings.

* took up bodybuilding as a hobby, entered the 'Mr. Universe Contest' in 1953 where one of the other competitors mentioned to him auditions for a theatre production of 'South Pacific'. He applied and landed a small part.

* was a keen footballer spotted by Manchester United and offered a contract worth £25a week which he turned saying later : "I realised that a top-class footballer could be over the hill by the age of 30, and I was already 23I decided to become an actor and it turned out to be one of my more intelligent moves."

* was filming with Lana Turner in 1958, when her possessive gangster boyfriend, believing that she was having an affair with Sean, stormed onto the set and pointed a gun at him. Sean disarmed him and knocked him flat on his back and then had to lie low after receiving threats from the gangster's gangster boss.

* had his breakthrough in the role of secret agent James Bond in 'Dr No' in 1962 and played the the character in seven commercially successful films.

* was considered doubtful for the part by Bond's creator, Ian Fleming who said :
"He's not what I envisioned of James Bond looks" and "I’m looking for Commander Bond and not an overgrown stunt-man," and added that he was "unrefined".

* was given stylistic tuition by Director Terence Young, who apparently took him under his wing, took him to dinner, showed him how to walk, talk and even how to eat.

Here are the trailers for :

'From Russia With Love' 1963 :
http://www.youtube.com/watch?v=gJaqZkQrWCg&feature=related

His interview with Barry Humphries :
http://www.youtube.com/watch?v=INWMAFgZDNg&feature=related

The Gaurdian Newspaper while drawing attention to his birthday and his films said that :

'did he in each one display the chameleonic skills that habitually define the actor who survives six decades in this fickle business that we call show? He's more of an old-school star, fitting the part to his strengths rather than subsuming himself within it.
What does that mean? He plays Sean Connery, mostly.
It's all part of the magic that makes him him. So we shouldn't touch on his controversial status as a tax exile while supporting Scottish nationalism, whiffs of misogyny, or accusations of violence – strenuously denied – made by his ex-wife?