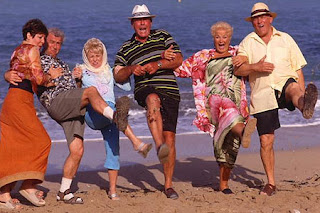 There are now an estimated 900,000 British 'expatriot pensioners' living away from Britain.

It's difficult to imagine that number, so to help, here are 100 expats :

Now, if you blink once a second at the 100 expats 9,000 times, you would have seen them all and if you translate 9,000 seconds into hours and minutes, you would have been blinking continuously for 150 minutes or 2.5 hours.

That should give you some idea of the number of 'retired' men and women who have left these shores.

Against this background, an article in the 'Daily Mail Newspaper' this week announced that :

Apparently, a recent survey, carried out for the Nat West Bank by the 'Centre for Future Studies' which questioned 1,300 retirees, shows that :

* seven out of ten Britons who have retired abroad are happy with their new country and likely to stay there.

* fewer than one in five who have gone to live in France, Portugal or Spain are considering returning home.

* nine out of ten of expat retirees live among the natives of their adopted country rather than among fellow Britons in communities of exiles.

* the trick to a happy retirement overseas may be planning ahead with the 'highest levels of satisfaction' among those who were employed in their new country before giving up work.

* among those in Australia, New Zealand, Canada and the U.S. who worked in their chosen country before retiring, fewer than one in ten thought they might go back to Britain.

* Nearly 150,000 British citizens left the country last year to live abroad, many of them after giving up work.