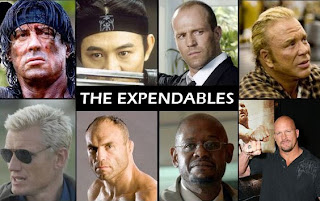 At the age of 64 Sylvester Stallone is fighting hard to stave off age and has taken a bunch of aging Hollywood stars with him and his new film 'The Expendables' will be transported across the Atlantic to us in these small islands.

Apparently, for Stallone, and my quotes are from a critic :

* at 64, after his heyday as 'Rocky' and 'Rambo', his 'physique and facial features seem frozen into a kind of immobility'.

* his film 'The Expendables' is 'a very old-fashioned B-movie with gruesome and extreme violence including, decapitations, knives through gullets and people exploding'.

* his script went through 100 drafts.

* he, never a clear speaker, 'spends most of his time grunting'.

* there are two big 'dialogue' scenes one where he meets up with his two 'Planet Hollywood Co-investors' Bruce Willis and Arnold Schwarzenegger.

* 'perhaps this is meant to be like that memorable scene when De Niro and Pacino sparred with each other in 'Heat'.'

* the badinage is 'so laboured that it never sparks into life'.

* in the film the big acting moment comes when Mickey Rourke,'playing a former mercenary turned tattoo artist who has a long speech about the moment in Bosnia when he lost his soul'.

* has made a film with 'a dated attitude towards women who are are helpless damsels who must be protected with maximum violence'.

' he 'remains a true primitive, and this film is aimed quite shamelessly at males who like to see hot babes, big weapons and lots of things blown up real good'

'or anyone more sophisticated, it resembles not so much an all-star movie, as one of those packaged concert tours consisting of old pop groups you thought were long since deceased'.

Now I turn to a Welsh poet called Dylan Thomas who, like Sylvester 'raged against the dying of the light' and produced this poem : 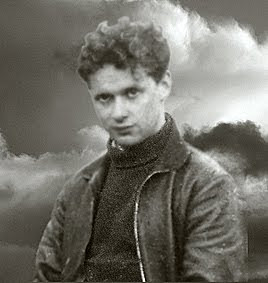 Do not go gentle into that good night,
Old age should burn and rave at close of day.
Rage, rage against the dying of the light.

Though wise men at their end know dark is right,
Because their words had forked no lightning they,
Do not go gentle into that good night.

Good men, the last wave by, crying how bright,
Their frail deeds might have danced in a green bay.
Rage, rage against the dying of the light.

Wild men who caught and sang the sun in flight,
And learn, too late, they grieved it on its way.
Do not go gentle into that good night.

Grave men, near death, who see with blinding sight
Blind eyes could blaze like meteors and be gay.
Rage, rage against the dying of the light.

And you, my father, there on the sad height,
Curse, bless me now with your fierce tears, I pray.
Do not go gentle into that good night.
Rage, rage against the dying of the light.

Dylan in his own words :
http://www.youtube.com/watch?v=9i12PSzFu5E

Who shall be remembered in a hundred years ?