What you possibly didn't know about Roger, that he :
* was born in Hammersmith Hospital, London during a German air raid in 1944 and was brought up in Acton with his two sisters and where his father, Harry worked for a water closet manufacturer.
* at the age of 3, swallowed a rusty nail which was surgically removed and then at 5 went back to hospital to be treated for an ulcer caused by the rust from the nail and in the same year joined Victoria Primary School.

* at 11 went to Acton County Grammar School with Pete Townshend (right) and John Entwistle and dashed his parents hopes that he would study at university at 18 by becoming a school rebel and developed an interest in the emerging rock and roll music scene instead. 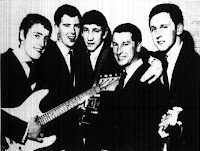 * made his first guitar from a block of wood, a cherry red Strat copy and joined 'The Detours' skiffle band in need of a lead singer and when his father bought him an Epiphone guitar when he was 15 in in 1959, became the lead guitarist for the band.
* was expelled from school for smoking with Pete Townshend later writing that : 'Until he was expelled, Roger had been a good pupil. Then he heard Elvis and transmogrified into a teddy boy with an electric guitar and a dress-sneer. Was it simply rock 'n' roll? It was obvious to a young man as intelligent as Roger that there was no future in conforming any more.'

* became an apprentice sheet metal worker by day, while practising and performing nights with the band at weddings, pubs and working mens clubs and invited schoolmate John Entwistle and, on his advice, Pete Townshend to play guitar and by the time Keith Moon joined as drummer in 1964 was the singer and harmonica player, 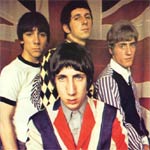 * was the band's leader, earning a reputation for using his fists to exercise control despite his small 1.70 stature and according to Pete : 'ran things the way he wanted. If you argued with him, you usually got a bunch of fives' and generally selected the music they performed, including songs by 'The Beatles', Motown artists and James Brown.
* in 1964, at the age of 20, was instrumental in changing the band's name to 'the Who' but was expelled in 1965 after he beat up drummer Keith Moon for supplying drugs to Pete and John and only allowed back on condition that there would be no more violent outbursts or assaults and later recalled : "I thought if I lost the band I was dead. If I didn't stick with The Who, I would be a sheet metal worker for the rest of my life."
* at 21 enjoyed the band's first hit single with the Townshend-penned "I Can't Explain"
https://www.youtube.com/watch?v=h3h--K5928M and collaborated with Pete with the band's second single, 'Anyway, Anyhow, Anywhere' http://www.youtube.com/watch?v=0hYjsOqOYHo but, as Pete began writing original material, saw his dominance of the band decline but developed as a powerful vocalist and front man whose habit of swinging the microphone around by its cord on stage became his signature move.
* with 'My Generation' captured the revolutionary feeling of the 1960s for many young people around the world and and his scream near the end of "Won't get fooled again" became a defining moment in rock and roll.
http://www.youtube.com/watch?v=594WLzzb3JI
* went on with 'The Who' to sell 100 million records, chart 27 'top forty' singles in Britain and the USA and 17 'top ten' albums. 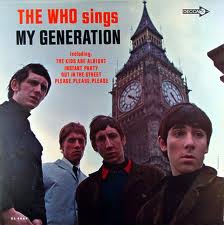 People try to put us d-down, Just because we get around.
Things they do look awful c-c-cold,
I hope I die before I get old.