Britain's Kent is no county for neither old men, nor dead men or ambulancemen

I live in a conurbation of the 3 towns in North Kent, consisting of Rochester, Chatham and Gillingham. I have been reading the local newspaper, 'The Medway News' since I settled in the Medway Towns 40years ago.

There were short reports this week on :

Nose-biting thug is jailed :
'A thug who tried to bite off his victim's nose and ear has been jailed for five years'.

Explosion could lead to prison :
'A man involved in a long running dispute with a shopkeeper has been found guilty of a dangerous explosion. He filled an airbed with an accelerant and set light to it on a fence to cause a blast'.

It was however these 2 articles which took my attention :

* Two families were left distraught by suspected 'grave-robbers' who disturbed their loved-ones plots in the churchyard at Hoo St Werburgh Church.

* A hole had been dug into the final resting place of Theresa McDowell, 81, and her husband John who had died a few weeks apart in January 2007.

* Then a second grave was targeted.

* Mr Hollands, the Churchwarden said: "I have never come across anything like it. There is no damage to the gravestones or coffins, but nevertheless it is obviously very upsetting for the families. Why anyone would want to do this we have absolutely no idea. It's very upsetting." 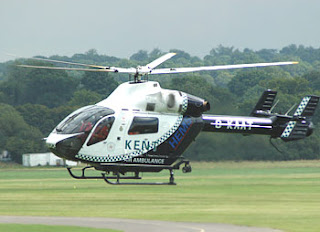 * A helicopter landed on a cricket ground in Sevenoaks, at around 4.30pm on Sunday in response to an emergency at a restaurant where a baby had been scalded on its legs and arms.

* The pilot is said to have been verbally abused and grabbed by the throat after telling two young men to stop swinging from the door and the tail fin of the helicopter.

* The police were called and One of the teenagers had to be carried horizontally across the road by officers to where the police van was parked. His legs had been bound and his trousers came down while he was being carried.

* The Kent Air Ambulance Chief Executive said the incident prevented the helicopter from being used to take the baby to hospital. "I find it incredible that anybody would want to attack a charity air ambulance and its crew, whose sole purpose is to help seriously injured people".

* As a result of the possible damage caused the aircraft was unable to return to service until given a full inspection by an engineer.