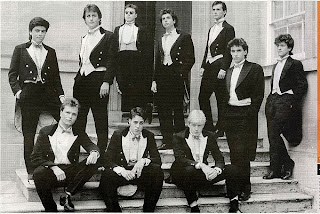 David Cameron (second in from the left in the top row) and other Bullingdon Club members at Oxford.

Britain has a new Government of young men who are linked by background, friendship and family ties — but most of all by class. Nothing changes here. Britain may be a democracy, but it always has and still is governed by toffs.

* son of a stockbroker and grandson of a baronet.
* a descendant of King William IV and distantly related to the Queen.
* an Old Etonian.
* a former member of the Bullingdon Club, the elitist Oxford University drinking and dining clique.

* former pupil of Westminster School.
* Cambridge University graduate.
* Grandmother was a White Russian baroness and his great-uncle was clubbed to death in Russia by his own peasants.
* parents live in a vast chateau in France.

* former pupil of St Paul’s School.
* Oxford graduate and a former member of the Bullingdon Club.
* a millionaire through his family firm, Osborne & Little, which makes paint and wallpaper.

* former president of the Oxford Union.

* former pupil at Wath-upon-Dearne comprehensive in South Yorkshire.
* Graduate of Oxford University.
* former editor of the 'News of the World'.
* plays a key role in reminding the public-school dominated inner circle of the new Government of the hopes and fears of tabloid readers.

* friend of Cameron since they were at Brasenose College, Oxford,
* likely to be elevated to the House of Lords as a Junior Minister.

* Cambridge graduate he took a double first in economics.
* did well in the City — he worked for JP Morgan. 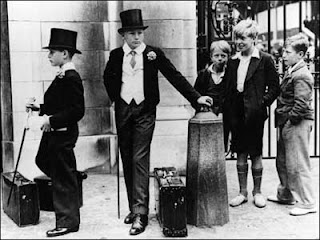