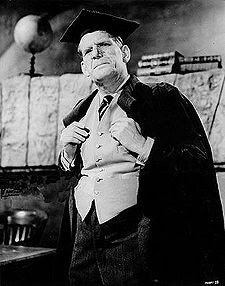 My posting yesterday about old teachers in Modern Britain brought back a memory of an old black and white film from the 1940's called 'Good Morning Boys' and starring the gentle comic, Will Hay as a public school master.

Will who made a series of short black and white films in the 1930's and 40's. Today the films provide an insight into the social relationships, speech and dress of a Britain long since gone. It was in my youth in the 1950's and 60's that it began to disappear. I suppose, baby boomer Brits like me provide a bridge between that old Britain and the one we have today. Oh dear, doesn't that sound pompous - it brought out the old school teacher in me. Will Hay died when I was 2 years old.

Here he is in a clip from 'Good Morning Boys' which was made in 1937 :
Go about 3 minutes into it to get to the classroom :
http://www.youtube.com/watch?v=vHfgp-T4FJA

Things I didn't know about him, he :

* trained as an engineer but at the age of 21, gave up that profession for the stage, starting as a juggler, self-taught after seeing W.C.Fields doing it in a film.

* made his first film when he was in his mid-40s and an established music hall artist.

* was arguably, the dominant 'author' of all the films in which he appeared, built around his persona and depending on the character and routines he had developed over years on the stage.

* was a dedicated and respected amateur astronomer and a Fellow of the Royal Astronomical Society who, in 1933, discovered a white spot on the planet Saturn.

* wrote a book 'Through My Telescope' in 1935 which had a foreword by Sir Richard Gregory, once Professor of Astronomy at Queen's College, London.

* was one of Britain's first private pilots and gave flying lessons to Amy Johnson.

* as part of the war effort, joined the Royal Navy Volunteer Reserve as a sub-lieutenant in 1942 and later became an instructor in astronomy and navigation with the Sea Cadet Corps.

* made this propaganda film about the British Navy called 'The Big Blockade' in 1943 :
http://www.youtube.com/watch?v=FaxAo-Y_hEI

* was a polyglot and an accomplished translator who was fluent in French, German, Latin, Italian, Norwegian and Afrikaans.

* as a favourite trick for his friends, would write rapidly, seeming nonsense on a blackboard, look at it with a puzzled expression, then turn the blackboard upside down to reveal a perfectly written statement and could repeat the trick at someone's dictation.

Here are some clips from his films :