So, is Britain no country for old men ?

When I started this blog a year ago I said that : 'I had time to look around,turn over stones and see if this country of our is,or ever was, a country for old men ?'

My odyssey has led me to many places where I had not been before by :

* Thinking and writing about my own reflections about incidents in my daily life.

* Considering the position of Britain's old men in the past and old men in other countries today.

* Publicising relevant articles I had come across in the press or on the radio.

* Publicising little known facts about old men and women on their birthdays.

* Considering the part played by the old who had 'passed over'.

* I have improved my internet 'nose' and research skills.

* I have learnt how to copy and paste web links and photos.

* Having worked on a posting there is the pleasure of publishing it and saying to myself : " I did that. No one else."

* The pleasure of looking on my site meter and realising that individuals from all over the world have looked at the blog. Admittedly, most only look once and do not return but nevertheless, I wonder about them :

Who are they ?
What do they do ?
Where do they live ?
What did they think ?

In the last week, who was that person in ? :

* The selfish pleasure of nostalgically going back to the songs and music of my youth and publishing them on my blog.

* My conclusion was implicit in my title : Britain is 'no country for old men'.
Now I am not so sure. In many ways it isn't, but in other ways it is.

* Like Odysseus, I shall continue on my voyage around these islands and its people as he voyaged the Mediterranean on his seven year journey back to his home in Ithaca. 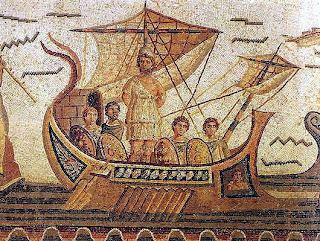 My Dad took me to see Kirk Douglas in 'Ulysses' at the cinema when was 7 years old in 1954. I've remembered that film ever since.