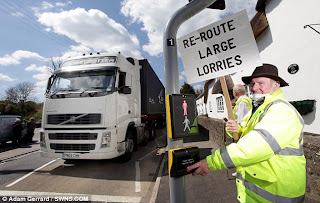 * Tony Fuller is 77 years old and is angry at the number of lorries driving on the busy A34 road which passes through his small Dorset village of Chideock.

* He believes that the village is too narrow for the lorries and wants a bypass built as an alternative route.

* He has said : "It’s virtually like a motorway, in fact it’s got as much traffic on it as a motorway but there’s no pavements and the houses are right on the road....
The pollution in the village is terrible. You can’t walk through the village without choking."

* Tony organised a protest a group of his neighbours to repeatedly use a pedestrian crossing to stop the traffic and said : "We only want them [Dorset County Council] to show they are doing something and when they do, we will stop, but if they don’t we shall continue, now, year after year."

* About 50 residents are to support the protest.

* Tony said: "If they all turn up and they each press that button (on the crossing)once, one after the other, that’s 50 times that traffic will be stopped and it will cause chaos. Because they’ve only gone across once each, they can’t be prosecuted for using the crossing that was put there for their benefit."

* According to the BBC, the protest caused a four mile tailback of traffic. 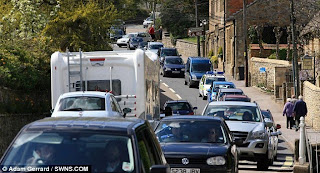 'THE GAURDIAN' 4th May

* 'As direct action goes, it was pretty simple and low-tech but Tony Fuller's campaign against lorries steaming through his Dorset village has drawn attention to his cause.

Fuller said he and a further 20 protesters were warned by police. But the 77-year-old insisted he would go to jail rather than stop the protest, and today he headed back to the crossing in Chideock, near Bridport, to repeat the exercise.

"It's fair to say we've had a mixed response from drivers," he said. "Some beep in support, but then there are some who generally give us the one-finger salute and shout aggressively.

...There has been a very angry reaction from some of the businesses along the road, but we are going to do it again.

..."I have had a warning from police, who told me I was inadvertently causing an obstruction. They say we are blocking the roadway but we are letting traffic through between each individual crossing..."

'Fuller, a retired Rolls-Royce fitter, said his "hand was forced" after he wrote 50 protest letters to the council, police and his MP. He said: "I understand this may not be making us very popular, but this really is the last resort for us."'

With 'THE TIMES' 5th May, Tony's protest is fast being transformed into a symbolic gesture :

'It is a very English protest. No stone throwing, no hysteria, just a pensioner pressing the button on a pedestrian crossing to highlight the damage caused by a rat-run through his village. Tony Fuller even let the lights stay green for short periods to stop the traffic building up. As for the reaction, that’s very English, too. No arrests, an acceptance that he acted legally, but the nagging doubt that it’s just not cricket.

Is there anything wrong with this kind of peaceful but annoying protest? For a start, using a pedestrian crossing is not illegal, but causing a public nuisance is. But what is illegal is not always immoral, and Mr Fuller seems to be following the principles of ethical civil disobedience set out by the late political philosopher John Rawls. He is not furtively trying to undermine the law but making his protest in the open. “If it came to it I would go to jail,” he said.

He has also exhausted lawful avenues, having written more than 50 letters to the council, police and MPs. Just-war theory seems to be on Mr Fuller’s side. His cause is virtuous; he has the right intentions; he has a chance of success in at least highlighting the issue; and his actions are proportionate and a last resort.

But that does not mean that he would be justified in carrying on indefinitely. A civil society depends not just on asserting legal and moral rights but considering the welfare of others, which is why noisy people on trains are not criminals, just gits.'
Posted by ...............................JohnBoy at 21:46