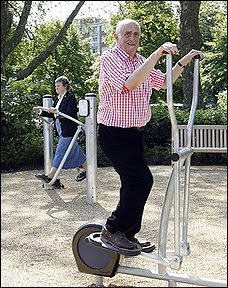 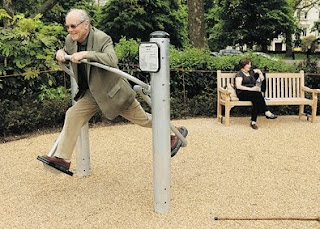 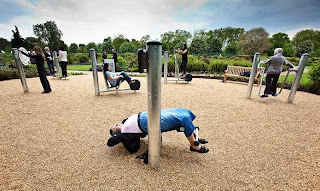 The oldest swingers in town are given playground to keep them young at heart.

The Times has reported that a 'Senior Playground' has just been opened in Hyde Park.

* it is in a corner of the gardens that contain the tennis courts, the bowling green and a children’s play area, the new outdoor facility features equipment designed for pensioners.

* “People can come and have fun and socialise at the same time,” said Madeline Elsdon, a member of Knightsbridge Association and the person behind the project. “We wanted to do something that led the way. Every park has a children’s playground. But there are few facilities for adults and very few for older adults. We hope in the future that every park will have a playground for older people.”

* when the project was announced it was covered in more than 500 newspapers and she has been inundated with inquiries from around the world about how to create something similar.

* the six pieces of Danish equipment are designed to be simple to use and provide gentle exercise, including twisting, swinging, walking and cycling movements. The only piece that slightly alarmed a group of senior citizens testing the playground yesterday was the sit-up apparatus.

* the project was funded by a £40,000 grant from Westminster City Council under a scheme to allow people in local council wards to choose neighbourhood improvement projects.

* while the playground is intended for those who have retired, only the under-15s are specifically warned off by notices. It is not a grandparent and grandchild facility. Gardeners shooed away a couple of youngsters who ventured near.

* “This is brilliant!” said a fit-looking lady who claimed to be 79 but gambolled about like a spring lamb and attributed her youthfulness to balletic exercise and living through rationing. “Youngsters these days don’t do enough exercise,” she said, as she swivelled at dizzying speed on one of the pieces of equipment. “I think this could take off. Elderly people are quite neglected, don’t you think?”

* Madeline Elsdon approached a well-known female television presenter out running in the Park yesterday. “I asked her if she knew about the older person’s playground. She said: ‘I’m not old! I don’t want to look old!’ Isn’t that funny?”

* 'I hate to be a cynic, but how will vandalism be prevented? You can bet your sweet bippy that attempts will be made'.

* 'Soon it will be full of empty packets of arthritis, blood pressure pills, Mars wrappers like the rest of play parks'.