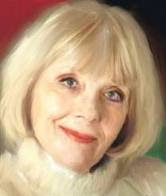 Britain's old men remember her from the the 1960's t.v. series called 'The Avengers'.

Things you probably didn't know about Diana, she :

* was born in Doncaster in the West Riding of Yorkshire where her father was a railway engineer.

* lived in India between the age of two months and eight years, where her father was a railway executive and still she speaks fluent Hindi.

* back in England, was sent to a boarding school which she disliked, because she felt 'like a fish out of water', however, believes that Yorkshire played a greater part in shaping her character than India.

* tried out for the role a whim ; did not like the lack of privacy that television brought and the way that she was treated by 'ABC Weekend TV' when she discovered that she was being paid less than a cameraman.

* was noted by Patrick Macnee, her co-star in the series, as saying that she "considered him and her driver to be her only friends on the set".

* after leaving 'The Avengers'. appeared as the title character in the telemovie 'The Marquise', based on a play by Noel Coward.

* returned to the stage where a nude scene with Keith Michell in 'Abelard and Heloise' led to a description of her by a critic as 'built like a brick mausoleum with insufficient flying buttresses'.

* in 1986, she took a leading role in the West End production of Stephen Sondheim's 'Musical Follies'.

* in 1969 in the cinema, played 'Tracy Bond', Bond's only wife in 'On Her Majesty's Secret Service' with George Lazenby.