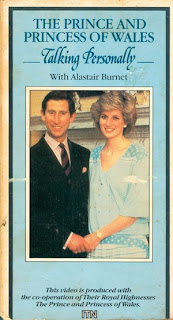 The Guardian Newspaper mistakenly announced that Sir Alistair Burnet, broadcaster, was 82 today, when in fact he was born on the 17th March 1928. My research,however, reminded me that he had been the ITN's interviewer of the Royal Family in the 1980's. He covered the wedding of Prince Charles and Lady Diana Spencer in 1981 and presented several documentaries about the couple :
'In Person: The Prince and Princess of Wales' in 1986 and
'In Private - In Public: The Prince and Princess of Wales' in 1988.

I thought back to the satirical TV puppet show, 'Spitting Image', which had portrayed him as a cringing, fawning Royalist ( "lick, lick, smarm, smarm" ), forever trying to suck up to the nearest available member of the Royal Family and the satirical magazine 'Private Eye' which had referred to him as 'Araslicker Burnet'.

Alastair Burnet was knighted in 1984.

These clips from 'Spitting Image' remind us that Britain in the 1980's was a less deferential and reverential towards 'the great and good'.

The irony is, that in the 2010's it is a country which is less deferential and reverential to anyone in authority - doctors, teachers, politicians and most of all those with no authority at all - the old.

P.S. Alistair as the serious newscaster :