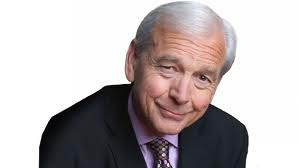 John Humphrys is 67 years old and still going strong as a t.v. and radio broadcaster and as a journalist.

I read an article this weekend in 'The Mail', entitled : 'Why we British aren't best at bettering ourselves' and, I think, began to understand him.

We learnt that his father :
* was a proud man who went blind when he was barely and although his sight returned , could never see well enough to drive a car and his sight got worse as he grew older.

* represented his county as a sprinter, even though he occasionally ran off the track.

* worked and brought up a large family without ever, "taking a penny from the State".

* had 'pride' and a 'deep resentment' whose 'heart told him he was every bit as good as the next man, but his head told him he was uneducated and working-class, and in those days people like him were meant to defer to their social superiors'.

* often 'recalled what happened one Sunday morning in the early Thirties when he and John's Mother had gone to visit his 'aged Aunt' in her little cottage in Somerset where they were about to sit down for lunch when the cottage door burst open and in marched an irate vicar.

* recalled "There was no 'Good morning... sorry to disturb you." The old lady leapt to her feet, dropped a little courtesy and the vicar barked, "You were not in church this morning, Mary-Ellen. Why not?"

* heard her stammer an apology and said that she was very sorry and it wouldn't happen again to which the vicar snapped back, "Make sure it doesn't ".

The rest is vintage Humphrys :

* for a few decades more we continued to treat figures of authority, from vicars to police constables to teachers to members of Parliament, with a respect they often didn't deserve.

* now the wheel has turned full circle. Unthinking deference is, to all intents and purposes, dead. Yet the class system has survived. Not that we talk about 'class' any longer, at least, not unless politicians are vying with each other to show off their 'men of the people' credentials. In modern jargon the 'Holy Grail' is social mobility.

Having read this I thought that I understood, a little better the man who has a reputation for being the most formidable interviewer in the media.


His life :
* born in a poor working class district Cardiff where his mother was a hairdresser, and his father a self employed French polisher.

* was one of five children who became a pupil at Cardiff Grammar School where he did not fit in to the 'middle class'environment and left school at 15 years to become on a local newspaper. Here he talks about his apprenticeship on local newspapers and how they are essential for local communities :

* joined the BBC in 1966 and as a Foreign Correspondent' reported the resignation of Richard Nixon and the execution of Gary Gilmore in 1977.

* in 1981 he became the main presenter of the BBC's flagship Nine O'Clock News and became part of the process of preparing the broadcast, rather than just reading a prepared script as with previous presenters.

* made the headlines in 2004 for giving the yearly MacTaggart lecture in which he made scathing criticism of the 'dumbing down' of British television.

* attracted further controversy in 2005 when he 'allegedly' branded all politicians as 'liars'.