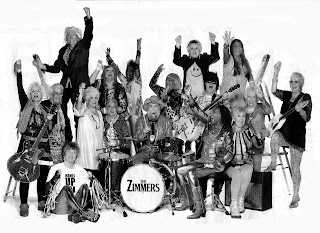 Alf Carretta who has died at the age of 93 was the lead singer in 'The Zimmers', a group which consists of 40 pensioners with a combined age of more than 3,000 years.

Some facts about 'The Zimmers':.

* were the brainchild of BBC producer, Tim Samuels, who was making a television documentary about the way Britain neglected its old people.

* take their name from the 'Zimmer' frame.

* their image of walking across Abbey Road is a parody of 'The Beatles'.

* in 2008, their full-length album 'Lust for Life', featured cover versions of songs by Eric Clapton, 'The Beatles' and Frank Sinatra.

* in 2007 their cover version of the 'The Who's' song 'My Generation' shuffled into the charts at Number 26.

Labels: Alf Carretta and The Zimmers