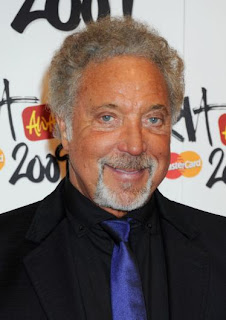 John Humphrys the veteran broadcaster was born in Wales and at 67, shows no sign of stopping. 'Sir' Tom Jones the veteran singer was also born in Wakes and at 70, also shows no sign of stopping. What is it about Welsh genes ? "Physically I'm fine" he has said, "I don't have plastic hips or knees."
He does admit, however, that his performances have become less "frantic" as he has matured. "When I was young I was just exploding all the time, I used to hammer every song".

Apparently, he is course to top 'album charts' with his 40th called 'Praise & Blame' and will become the oldest male musician to have a number 1 album , if he knocks 'Eminem' off the top spot.

Things you probably didn't know about him , he :

* was born Thomas John Woodward near Cardiff in Wales where his father was a coal miner.

* since the mid 1960s, Jones has sung nearly every form of popular music and sold over 150 million records.

* was struck down by tuberculosis when he was 12 years old and spent 2 years in bed recovering, where he could do little else but listen to music and draw.

* married his high school girlfriend, when he was 17 and the couple had a son who was born the month following their wedding and is still married to her although his womanizing once led her to beat him black and blue by punching and kicking him. He didn't fight back and said "I took it."

* took a job working in a glove factory in order to support the family and was later employed in construction.

* was spotted by Gordon Mills, who became his manager, took him to London and contrived the stage name, 'Tom Jones,' which linked him to the image of the title character in Tony Richardson's hit film and also emphasized his Welsh nationality.

* had a stage presence, act, and vocal delivery which was too raucous and raunchy for many record companies.

* eventually got a contract with Decca and released his first single in 1964. It didn't reach 'the charts', but the follow-up in 1965, "It's Not Unusual", reached 'Number 1' in the UK and the top ten in the USA.
http://www.youtube.com/watch?v=QrwO8b9iq34

* in the same year secured the theme for the film 'What's New Pussycat?' and the James Bond film 'Thunderball'.

* performed for the first time in Las Vegas in 1967, where his open half-unbuttoned shirts and tight pants became part of his stage act and where women first began to swoon and scream and would throw their knickers on stage.

* was performing at 'Caesars Palace', when woman first started throwing their hotel room keys on stage.

* met Elvis Presley in 1965 and remained good friends until Presley's death in 1977.

* began appearing on the BBC's review of the sixties music scene, 'Pop Go The Sixties' in 1970 and performed "Delilah" on a pre-recorded tape.

* faced declining popularity in the 1970's, although he did have a big hit in 1976 with "Say You'll Stay Until Tomorrow".

* in 2000 was invited by President Bill Clinton to perform on New Year's Eve at the Millennium celebrations in Washington.

* in 2005, in celebration of his 65th birthday, returned to his homeland to perform a concert in Pontypridd before a crowd of about 20,000 in his first performance there since 1964.

* was reported as Wales' 'wealthiest entertainer', with a fortune of £175 million.