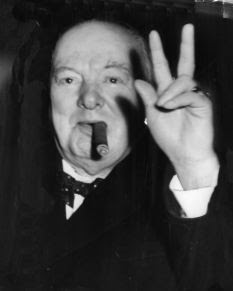 The 'Daily Mail' newspaper reported that :
Churchill's false teeth snapped up for £15,000 at auction.

Apparently, without gold-plated false teeth our Second World War Prime Minister, Winston Churchill would never have been able to make such rousing Wartime speeches. They heightened the quality of his delivery by emphasising his lisping speech impediment which made his voice so recognisable in radio braodcasts. Now, I always thought that the speeches were great depite his speech impediment, when in fact they were so great because of his impediment. Judge for yourself :
http://www.youtube.com/watch?v=LsKDGM5KTBY

Indeed, they were so crucial to him that he carried a spare set at all times. A collector clearly held them in equally high regard, bidding more than three times the guide price at the auction to snap them up for £15,200. He already owns the microphone Churchill used to announce the end of World War Two.

They were sold by Nigel Cudlipp, whose dental technician father Derek made them at around the start of the War when Churchill would have been about 65. He had suffered from terrible teeth and gums and needed complicated dentistry from childhood.

The delicacy and special design of the teeth were widely credited with helping Churchill speak clearly and effectively. Churchill valued so highly the skill of his dentist Wilfred Fish, who worked with Derk Cudlipp, that he nominated him for a knighthood. Derek's work was so important to Churchill that when his call up papers arrived Churchill tore them up, insisting he stay in London in case his dentures needed to be repaired.

P.S.
Churchill died in 1965 aged 90 and it is thought one his four sets of dentures are buried with him.

I am remided of the speech made by Colonel Tim Collins' speech to his troops of the eve of war in Iraq in 2003 :