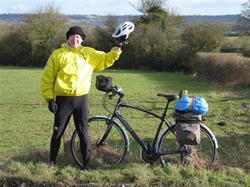 I had to make some decisions today. Should I celebrate the 63rd birthday of Julia Somerville or the exploits of 75 year old, retired Army Major, Chris Irven ?

Like me, she was an undergraduate at Sussex University between 1965 and '68. Unlike me, she was a member of that upper middle class smart set at the University which featured 'The Jay Twins', who were the daughters of the then President of The Board of Trade.

When Julia and I parted company as Sussex graduates she joined the BBC as a sub-editor in the radio newsroom became a reporter and in 1983 joined 'BBC Television News'. In 1987 she moved to to ITN and this year has returned to television as a presenter on BBC News.

His claim to fame : a headline in the Daily Mail : 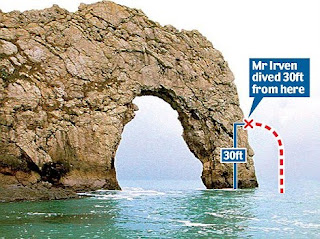 Isn't 75 a little too old for cliff-jumping? Thrill-seeking grandfather ends up in hospital after 'tombstoning' stunt

The article made the following points, he :

* climbed part of the way up a 100ft rock, leapt off and belly-flopped into the sea and ended up in hospital with groin and stomach injuries.

* attempted a swallow dive where the diver jumps off backwards and enters the water head first.

* went ahead even when his family had urged him not to and they watched from a packed beach.

* came to the surface and cried out in pain and his two sons ran into the water and dragged him out.

* was given oxygen on the beach before he was airlifted to hospital.

* was released after treatment.

* said : "I might be 75 years old but I am very fit for my age and fairly adventurous. I tend to do things that might be daunting to other people".

* and : "The dive was a bit of a cock-up and I hit the water at a bad angle, it was too shallow. My face, chest, tummy and legs took a battering. I started to swim back to shore but couldn't and my two sons came and got me out. I lay down and a bit of shock set in. I have got some bruising today but I am OK. If I do it again I will make sure I get it right next time."

P.S. Two months ago he completed a gruelling 2,000-mile cycle ride around Britain and raised more than £15,000 for the 'Help for Heroes' charity for wounded servicemen.

Despite his fitness, he has been urged not to try tombstoning again.