From the 1950’s onwards the number of 'centenarians', that is people aged 100 years or more in England and Wales, has increased at a faster rate than any other age group.

* The major contributor to the rising number of centenarians is increased survival between the age of 80 and 100 due to improved medical treatment, housing and living standards, and nutrition.

* Current population projections suggest the number of centenarians in England and Wales will reach almost 64,200 by mid-2033. This is nearly a seven fold increase from the 2008 figure, and an annual average increase of 8 per cent a year.

So here they are, today's young men and potentially, tommorow's very old men : 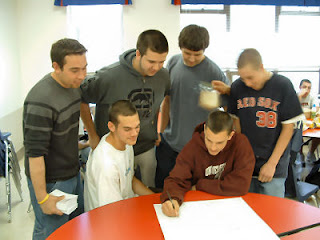