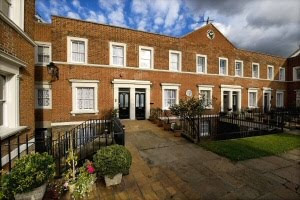 Yesterday , in the company of 20 'City of Rochester' guides, I spent part of the afternoon in 'La Providence' in Rochester. It is a retirement home for men and women and possibly their spouses who can trace their ancestry back to one of the the 200,000 French Protestants, known as 'Huguenots' who were kicked out of France by the Catholic King Louis 14th in 1685.

They settled in non-Catholic Europe, the Netherlands, Germany, especially Prussia, Switzerland, Scandinavia and even as far as Russia, where Huguenot craftsmen could find customers at the court of the Czars. The Dutch East India Company sent a few hundred to the Cape to develop the vineyards in southern Africa. About 50,000 came to England, perhaps about 10,000 moving on to Ireland.

Pamphlet literature of the time shows, they could not entirely escape the accusations levelled at immigrants from time immemorial : that their presence threatened jobs, standards of housing, public order, morality and hygiene and even that they ate strange foods!

For at least half a century the Huguenots remained a recognisable minority, making their presence felt in banking, commerce, industry, the book trade, the arts and the army, on the stage and in teaching.

The management of La Providence or 'The French Hospital' is wonderfully medieval :

* Management is still carried on as set out in the first Royal Charter of 1718, though a Supplemental Charter was granted by the Queen in 1953 to allow it to become a housing association.

* The 'General Court' of the Hospital consists of 'between 25 and 50' Directors, who are mostly themselves representative of French Protestant refugee families, and who serve 'for their natural lives'.

* The Court is presided over by the 'Governor', who is elected every three years as are the Secretary and Treasurer.

* The first Governor was Henri de Ruvigny, Earl of Galway, the revered leader of the Huguenots of the diaspora.

* For over 200 years, almost without a break, the office of Governor has been in the Pleydell-Bouverie family, held by the hereditary Earls of Radnor, the present Governor being the 9th Earl.

* The lists of Directors' in cludes the Bosanquets, Cazalets, Champion de Crespignys, Duvals, Minets and Ouvrys and others.

I spoke to one of the residents of La Providence, said the my Grandmother's maiden name was 'Lefevre' who was born and brought up in Lambeth in London in the 1880's and asked him how I would set about proving that she had, and therefore I have, Huguenot blood and I could therefore claim my right to some retirement accommodation in 'La Providence'.

He advised me that I should do some tracking down of ancestors and arm myself with copies of birth certificates, because the names of those original Huguenots who left France were known to the Huguenot Society.

So I've got to do some detective work. You never know, snug retirement accommodation in Huguenot 'safe haven' might come in handy in my twilight years. 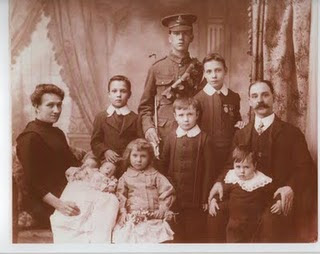 This picture of my Granny was taken in 1914, with my Uncle George in Army Uniform. He was 16 years old and had told the recruiting Sergeant that he was 18. My Mother is the little girl. 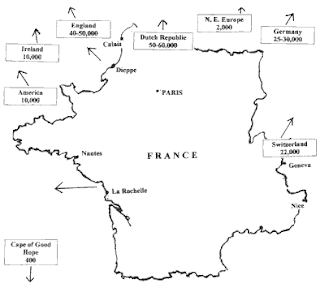