I read a moving article in 'The Daily Mail' written by the man who must be the world's most famous naturalist, the 84 year year old, David Attenborough. It was entitled :

My tears for my dear old brother.

It said of David that he :

* can't get around like he used to and has said that : "A walk in the countryside or along the towpath of the Thames is a good way to restore your sense of proportion, sort things out, get some sense of stability,"

* has also said that, "Whether it’s joy or grief – or the many things in between joy and grief: financial problems, legal problems, friendship problems – the natural world is a great source of solace."

* has known grief in his life, particularly when his beloved wife , whom he describes as "my anchor", died suddenly from a brain haemorrhage in 1997.

* in answer to the question : "Does he, I wonder, consider his own mortality?", he says : "Oh all the time. We’re all going to die. I think if I was living in the
16th century and believed there was hell fire and eternal torture awaiting me, I’d be frightened of death. I’ve no idea what’s going to happen, how can you be terrified? I only hope I don’t have too painful or too lingering a death, but the idea that I shall become extinguished doesn’t trouble me particularly."

* his brother, Richard, the celebrated actor and director, Lord Attenborough, is an agnostic like David, who a few years ago said he almost wished he did believe in God, because it would have given him comfort, or at least someone to blame, after losing a daughter and granddaughter in the Asian tsunami. 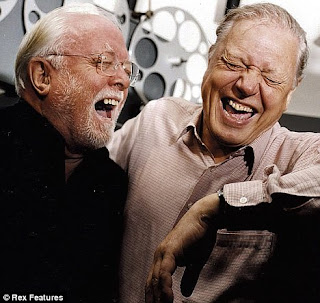 * said that the 87-year-old Richard had, 2 years ago, "fallen downstairs and damaged his brain, so was unconscious for a long time. He’s now back, but he’s in a wheelchair.I go down and see him at the weekend. We have our jokes, the ones we’ve had since we were kids."

P.S.
The photo in the middle shows David in the centre, Richard on the right and their brother John in 1933. 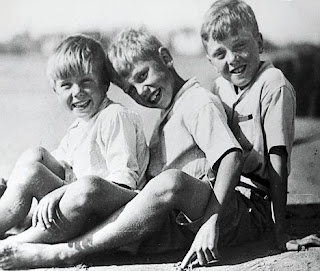 And as a reminder of what a great communicator he has been and still is :

David in his early days :
http://www.youtube.com/watch?v=N7MpA40kzRM

His, 'The tree of life' :
http://www.youtube.com/watch?v=qabl5eIba2g

I found this part of the newspaper article quite moving when Rebecca Hardy wrote :

'There’s time for a final question. I wonder if there’s a particular moment that stands out for him in his brilliant career?

"I can mention many moments that were unforgettable and revelatory, but the most single revelatory three minutes was the first time I put on scuba gear and dived on a coral reef. It’s just the unbelievable fact that you can move in three dimensions. That minute, when you suddenly move your weight, do that with your fin and know you’re going to move off. Suddenly, there are all these extraordinary creatures – wonderful shrimps or shoals of triggerfish or the looming shape of a shark. It’s an individual communion. That’s really revelatory and it’s part of our world."

Which is the memory I take away with me of this wonderful man: weightless, free and communing with the natural world that has brought him, and us, so much joy.'