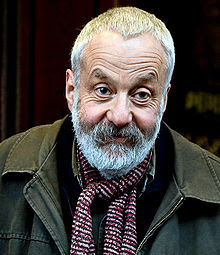 Mike Leigh, writer, film and theatre director is 68 today.
What you probably didn't know about Mike, that he :

* began as a theatre director and playwright in the mid 1960's and in the 70's and 80's made films for BBC TV characterized by a gritty 'kitchen sink realism' style.

* begins his work without a script, but with a basic premise which is developed through improvisation by the actors and only after months of rehearsal, the script is finalised with almost no improvisation on camera.

* is a gifted cartoonist, northerner who came south, proud and critical of his roots and Jewish background and he is a child of the 1960s and the explosion of interest in the European cinema and the possibilities of television.

* When he had arrived in London, one of the first films he had seen was 'Shadows', an 'improvised' film by John Cassavetes, in which a cast of unknowns was observed 'living, loving and bickering' on the streets of New York, and Leigh had "felt it might be possible to create complete plays from scratch with a group of actors."
http://www.youtube.com/watch?v=gx2rpqWJSfU&feature=related

His 'Nuts In May' from 1976, still makes me laugh :
http://www.youtube.com/watch?v=daEocG2dKCU