An article appeared in 'The Guardian' newspaper in 2007 entitled :

* 500,000 elderly people could be victims of crime but do not report their offenders through fear or embarrassment and could be the victims of street crime, bogus traders and abuse in their homes.

* the 'Crown Prosecution Service' admitted that there were no accurate figures of all crimes against older people and the true scale of the problem was likely to be far higher.

* the Crown Prosecution Service said it was determined to see those who prey on society's most frail and vulnerable citizens brought to justice and draft guidelines have been published setting out how prosecutors will bring cases against suspected offenders and support victims.

* the Service said 'special measures', such as video links between courts and the homes of victims, could help increase the number of successful cases.

Old people had a champion in the 'Director of Public Prosecutions', Sir Ken Macdonald, who launched the draft policy and said that targeting such offences should be a priority for society.

"We want older people, their families, communities and the general public to be confident that the CPS understands the serious implications of crimes against older people.

If there is any evidence that there is an aggravating element to an offence based on a victim's age, we will draw it to the attention of the court.

Safety and security and the right to live free from the fear of crime, arising from mistreatment or abuse, are fundamental rights and go to the core of older people's sense of well being.

Feeling and being unsafe, or 'at risk', has a significant negative impact on older people's health and sense of well being and can leave them isolated and unable to participate socially and economically in their community."

He also said that CPS officials would ensure that judges were aware if prosecutors felt that a victim’s age was a factor in the crime.

“If there is any evidence that there is an aggravating element to an offence based on a victim’s age, we will draw it to the attention of the court.”

Sir Ken retired as Director of Public Prosecution in 2008.

Has anything changed and a result of Sir Ken's fine words and the new draft policy ?
I doubt it.

Britain is a country where a large number of old people can expect :

These are all now part of everyday life and if old men have reason to talk to police officers, they are less and less in peaceful circumstances like this : 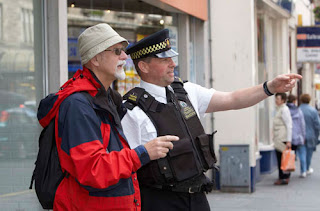