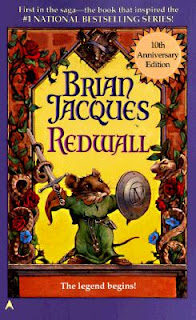 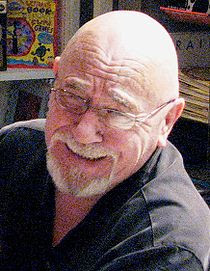 Brian, talking to kids about how to become an author to kids in Austin, USA :

What I didn't know about Brian, the writer, was that he :

* created warrior mice and evil weasels and told of the epic struggles between these 'good' inhabitants of Redwall Abbey and the 'bad' invaders who had to be kept at bay.

* supported his mice with voles, badgers, hares led by the good Abbot Mortimer and inspired by the Abbey's mission : 'to keep the world peaceful and ordered.'

* had the waves of violent invaders led by the rat,'Cluny the Scourge', who had one eye, a whipping tail, foul temper and a black heart.

What I didn't know about Brian ,the man, was that he :

* was born in Liverpool where his father was a truck driver who loved literature and read stories by Doyle, Stevenson and Burroughs.

* at age 10, described, in a written assignment about animals, a bird who 'cleaned a crocodile's teeth', was accused of copying and caned for refusing to say that he'd done so.

* said that his favourite teacher :
'Looked like Lee Marvin. Big Man. A Captain in World War II. He came to school on a big push bike with the haversack on back. He was a man's man. Always fair. I was fourteen at the time when Mr. Thomas introduced the class to poetry and Greek literature. It was because of him, I saved seven shillings and sixpence to buy 'The Iliad' and 'The Odyssey' at this dusty used book shop.'

* claimed that he drew much from Liverpool for his books, in terms of place and character, and memories of the bombing of the city in the 'Second World War' for his set-piece battles.

* said that his early experiences as an altar boy in the Catholic Church with its 'Latin' services, inspired the the rich language and imagery of his writing.

* while delivering milk to the 'Royal School for the Blind', first started telling the 'Redwall' stories to the pupils and their 'needs' encouraged him to paint pictures with words so that they could see them in their imaginations.
http://www.youtube.com/watch?v=4nYDN8k33tM

* had his work recognised when one of his old teachers, Alan Durband, who showed it to his publisher saying : "This is the finest children's tale I've ever read, and you'd be foolish not to publish it".

* part 3 of talking to kids in Austin :
http://www.youtube.com/watch?v=b5gt6CvSagA