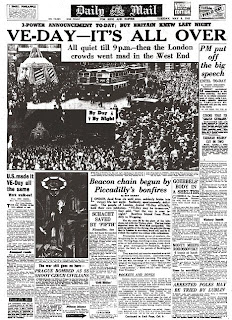 Dominic Sandbrook, is a 37 year old historian who writes in the 'Daily Mail'.
His 'Saturday Essay' in the paper was entitled :
LUCKY GENERATION
The children conceived on VE Day turned 65 this month, having enjoyed lives of unprecedented affluence and opportunity. But thanks to their self-indulgence and hubris, their children face a very different future.

So who is this young journalist, free from the corruption of 'self-indulgence and hubris' ? 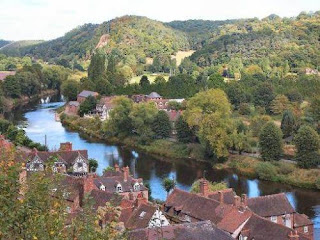 Apparently, he was born in the little town of Bridgnorth in Shropshire.

He was educated at the private boarding school called 'Malvern College'.

He then went on to the University of St Andrews in Scotland.


Since leaving University Dominic, has lectured in history at the University of Sheffield, been a 'Senior Fellow' of the Rothermere American Institute at Oxford University and is now a freelance writer and newspaper columnist.

He has written a 'biography' of the American politician and presidential candidate Eugene McCarthy, which McCarthy himself called, 'almost libellous' and has written a series of books covering the history of Britain from 1956 to 1974.
http://www.meettheauthor.co.uk/bookbites/1148.html


So, what has this young man, who has experienced a life of such breadth and depth, got to say about me and the other 'baby boomers' of my generation ?

* ourselves, have enjoyed lives of affluence, but thanks to our self-indulgence our children face a different future.

* are the richest and most influential generation the world has ever seen and have enjoyed a level of comfort and security that would have astonished our predecessors.

* like no generation before or since, grew up with a powerful sense of our own distinctiveness and conceived amid the rubble of wartime, born and brought up in a society hurtling from austerity to affluence, never ceased to remind ourselves how special we were.

* as teenagers in the 50's and 60's, often scoffed at the conventional, conservative values of our parents, celebrated freedom, tolerance and self-expression and revelled in the consumer comforts of the affluent society, convinced that the boom would never end.

* from free school milk, social security and grammar schools to cheap holidays, women’s liberation and the shopping revolution, have enjoyed comforts our parents could barely have imagined.

* enjoyed an unrivalled balance of freedom which was buttressed by an economic miracle which looked as though it would never end and by the time we entered our teens in the late 50's we already had a strong sense of our own distinctiveness.

* when the economy ran into trouble in the 70's it was us, in our 20's and 30's, who walked out on strike in the catastrophic 'Winter of Discontent'.

* replaced self-restraint with self-gratification and almost doubled the illegitimacy rate and increased the abortion and divorce rates.

* talked a lot about equality and opportunity, but in the world we created, Britain’s young have been cut adrift while we, thanks to our sheer size and power, have been able to maintain an unprecedented monopoly on jobs, houses and income.

For all this, Dominic said about us that he :

wished us ' a long and happy retirement and they will probably be the last generation to retire at 65; the rest of us may end up working until our 70s. In this, as in so much else, they were uncannily lucky. What a shame, though, that they declined to share their good fortune with the rest of us.'