Britain is no country for old men and women in hospital 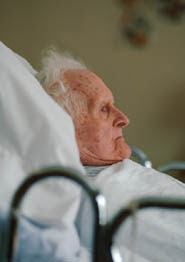 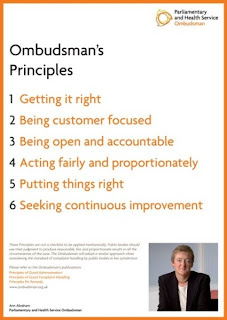 Ann Abraham, the National Health Service 'Ombudsdman', has warned that it is failing to respond to the needs of older people with care and compassion and accuses its staff of an ‘ignominious failure’ to care for the elderly.

Her report, just published, highlights 10 appalling examples of neglect of the frail and vulnerable. It cites :

* distraught relatives saying loved ones have been completely ignored and their basic rights disregarded.

* patients being left so dehydrated on hospital wards they couln't even cry out for help.

* frail patients, discharged when they were dangerously underweight and the case of one elderly woman was sent home in another patient’s soiled clothes, held up by paper clips.

* patients not even helped to the toilet and left for months without being taken to the shower or bath.

The report dealt with the cases of 10 specific patients and blamed 'poor care' or 'badly managed medication' for contributing to their deteriorating health and their transformation from 'alert and able individuals' to people who were 'dehydrated, malnourished or unable to communicate.'

* Mr D, an advanced stomach cancer patient, whose family found him in a 'distressed' condition when he was discharged with 'inadequate pain relief', leaving his family to find someone to dispense morphine over a bank holiday.

• Mr C, who suffered a heart attack soon after undergoing quadruple coronary artery bypass surgery and had his life support machine turned off, even though his family had asked for the staff to wait a short while longer.

* Mr L, a 'Parkinson's disease' sufferer, who at 72, was a once 'brilliant' architect who enjoyed keeping fit, whose care and treatment contributed to a 'loss of his dignity' and 'compromised his ability' to survive pneumonia.

So what does this report tell us about attitudes towards old people in Britain today, given the fact that doctors and nurses display and reflect wider attitudes within British society ?

To me, the message is that :

Old people are no longer worthwhile members of society. They have served their purpose and are now a burden and those in hospital are 'the most burdensome' of all. They can be dismissed and treated with indifference and there is nothing wrong with this.

Katherine Murphy, Chief Executive of the 'Patients Association', has said:

"The situation is completely unacceptable. The Health Service should always get these basic patient needs right. There isn’t an on-cost to this – it is an entitlement that every individual has a right to. Attitudes need to change – older patients need to be treated with respect and compassion, not as an inconvenience."

"The inhumane treatment of older people described in this Report is sickening and should send shockwaves through the NHS and Government. It’s difficult to imagine us allowing any other group of people to suffer this indignity and neglect, yet we know this is just the tip of the iceberg: appalling treatment of older people in the Health Service is far too common. This is not only a damning indictment of our health service, but of our society in general, where older people count for less and damaging discriminatory attitudes against older people remain rife."