Analysis by the 'Office for National Statistics' for the Spectator Magazine has shown that there are 789,000 fewer working-age Britons in employment than there were ten years ago, but 358,000 more pension-age workers.

The report, published this week said that :

* the idea that  'over-65s are a burden on the young' does not stand up to scrutiny and many have been forced to take jobs which younger people refuse to do.

* ‘The only way that the economy expanded during the Labour years was through more debt, foreign-born workers and pensioners returning to, or staying in work.’

* ‘The changing nature of the British workforce has not just meant Polish plumbers, but also British pensioners, behind the tills at Tesco.'

*  'Many employers prefer to hire pensioners, because they can be relied upon to turn up on time and don’t turn their nose up at work and in many cases, the value of their pension has been shot to pieces,  so they need to keep earning.' 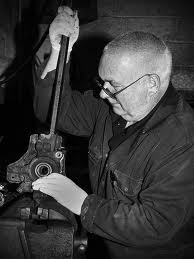 My earlier post in April 2011 :
Britain is a country where more and more old men, too poor to retire, are forced to work longer and longer
http://britainisnocountryforoldmen.blogspot.co.uk/2011/04/britain-is-country-where-more-and-more.html

and January 2011 :
Britain will soon be a country where old men can work longer and longer and not be forced to retire