This was the Conservative Minister and 'Chancellor of the Exchequer', George Osborne yesterday, holding a battered old case in which chancellors carry their taxation plans for the forthcoming year to Parliament. Inside was a document laying out the Government plans to, among other things :
*  ensure, by a cut income tax for 300,000 of the richest households in Britain that they will get more a year
* ensure, that 4.4 million pensioners with incomes between £10,500 and £28,000 in Britain will get less a year

The front page headline in the 'liberal' Gaurdian newspaper today : Special tax allowances for the over 65's, which were first introduced in 1925 by then Chancellor, Winston Churchill, seen here is budget box, were given in recognition that pensioners had lower than average incomes and had already spent their lives paying tax and National Insurance.
Apparently, the Treasury was taken aback by the strength of the backlash against Mr Osborne’s decision and the tax raid, described privately by some Tory MPs as a serious political mistake, overshadowed other measures in the Chancellor’s widely trailed statement.

Ros Altmann, Director General of Saga, said:
"This budget contains an enormous stealth tax for older people. Over the next five years, pensioners with an income of between £10,000 and £24,000 will be paying an extra £3billion in tax while richer pensioners are left unaffected." 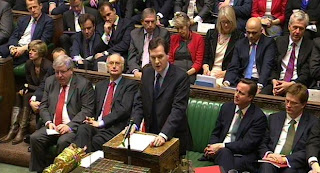 George Osborne delivering his budget speech in the House of Commons with the Prime Minister, David Cameron, sitting behind him and here he is defending his treatment of old men :
http://www.telegraph.co.uk/finance/budget/9159947/Budget-2012-George-Osborne-defends-granny-tax.html

Labels: No tax concessions for pensioners by George Osborne