Is Britain no country for a controversial old historian called David Starkey ? 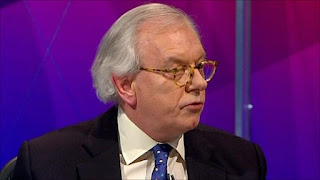 David Starkey is a 67 year historian and specialist in Tudor History whose appearance on the tv programme, 'Question Time' last night, provoked an article in the 'Daily Mail' entitled :

"We should never have liberated France": David Starkey courts yet more controversy by claiming nations should be left to free themselves from oppression

It made the following points, that he :

* has become as well known for his acid-tongued outbursts as for his historical insights and faced calls to be dropped as a BBC panellist after his latest outrageous appearance on 'Question Time'.

*  said that France resented Britain and the U.S.A. for liberating it from Nazi occupation, adding: "People don’t like being freed."

* prompted a backlash from viewers, who branded his performance ‘rude’, ‘intolerant’ and ‘offensive’.

* has previously been accused of racism after describing Scotland, Wales and Ireland as "feeble little countries" on the BBC1 panel programme and blaming ‘black culture’ for the riots that swept the country last August.


His argument was that :

The West should not intervene in Syria because nations should free themselves from oppression. "Humanitarian intervention is almost always disastrous. Let me give you an example, it’s called France. You will remember Britain and America liberated France. What thanks did we get from them? The French have spent the last 40 years trying to obliterate the shame by doing everything they can to damage Britain and America. People don’t like being freed, they mistake liberators for conquerors."

This provoked his shocked host, David Dimbleby, to ask  if he was suggesting Britain and the Allies should not have acted to save France in 1944 ?
"No, I’m not David. We didn’t go into France to liberate France, we went into France to destroy Nazi Germany."