Britain is a country where old men will watch a cinema film, directed by old an old Dustin Hoffman, with old actors playing old men in a retirement home

An article in 'The Gaurdian' yesterday was entitled :
How older viewers are rescuing cinema

A quiet revolution is afoot: older people are flocking to cinemas. But they don't care for special effects. They want big characters, grown-up dramas and tales of late-blooming love. And so Hollywood's changing its game.
It made the point that films like 'The Best Exotic Marigold Hotel' are attracting an older audience back into cinemas which until recently were seen as 'no-go zone' for them with perhaps a 'silver screening' in a teatime slot, but the rest of the time noisy youngsters would hold sway, crunching popcorn, spilling Coke on the floor and texting during the show.

It tells the story of a group of British retirees comprising the actors at the age of :
64 : Tom Wilkinson -
63 : Bill Nighy - my earlier posting on their birthday : http://britainisnocountryforoldmen.blogspot.com/2009/12/britain-says-happy-birthday-to-3.html
72 : Ronald Pickup

They have outsourced their retirement, attracted by the less expensive and seemingly exotic India, enticed by advertisements about the newly restored Marigold Hotel and given false dreams of a life with leisure. They arrive to find the hotel a shadow of its former self and although the new environment is less luxurious than imagined, the old people are  transformed by their experiences. Meanwhile in the USA, 75 year old Dustin Hoffman's directing debut, 'Quartet', will feature a group of old singers living in an 'opera singers only' retirement home, whose year plans to put on a concert in order to raise funds for their home go awry. Dustin has assembled a cast of British veterans : the age of : 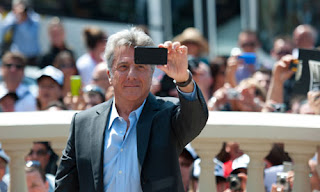 Labels: Old men go to the cinema to see films about old men in retirement homes