An article in 'The Guardian' today was entitled :

Tom Conti: 'I knew nothing at all about street dance … '

The veteran Scottish actor has always been a smoothie, and now he's showing off his moves in Streetdance 2. 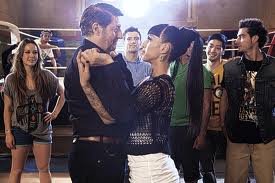 Tom, who is 71 years old, said of the film :
"It really wasn't about dancing. It was about the connection between man and woman. The streetdancers don't connect with each other, they just do phenomenal acrobatics. There's no sex, really."

* doesn't like to dance, has trouble with the tango, spurns the quickstep, turned down place on tv in 'Strickly Come Dancing' saying "I'd make a total arse of myself".

* plays 'Manu', a curmudgeonly French club owner who helps a troupe of young breakdancers learn how to fuse the energy of street dance with the raw sexuality of Latin and still displays sexual tension with his twenty something street dance partner.


*  thinks that the dancers will " all have arthritis by the time they are 40. They do their bodies in. It's horrific. There's a thing at the end where we all stand in a big circle and everybody goes in and does a little bit. Like a curtain call. This guy jumped in and he did almost all of the dance on his head. On his head! He'll pay for it later."

* was classically trained as an actor and was irked by inexperienced cast who had a problem with mumbling their lines, saying : "Elocution! You feel such an old fool, but I'm afraid it's the first rule" and said that being the oldest person on set was sometimes "awful and weird". 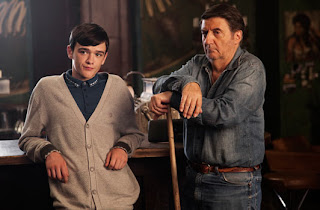 * had George Sampson, on the left, who plays the crew manager, 'Eddie', say of him : "I hope when I'm his age I'm as smooth as Tom Conti. He's so graceful. And he was a soldier for trying that salsa."