Things you possible didn't know about Philip, that he :

* attended Cyfarthfa Castle Grammar School and read classics and modern languages at Cardiff University, a natural linguist, went to the University of Vienna to train as an interpreter, became proficient in Russian which he thought the most beautiful of languages, apart from Welsh.

* joined the Royal Academy of Dramatic Art at the age of 24, started in repertory theatre in 1959 on a salary of £8 a week then moved into television, making his screen debut in the 1961 as a German Officer in the BBC Sunday Night play, 'Cross of Iron'.

* first gained widespread recognition in two tv serials, first as the relentless SS Officer, Lutzig, in the World War Two serial, 'Manhunt ' in 1969 and then as the vicious Huron warrior, Magua, in a serialisation of 'The Last of the Mohicans' in 1971.
http://www.youtube.com/watch?v=pyVXBbdFo-M 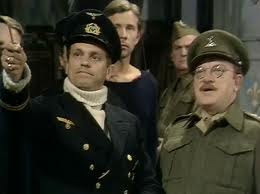 * reprised the character of Lutzig in an episode of the comedy 'Dad's Army', where he played a U-boat Captain held prisoner by the Walmington-on-Sea platoon of the Home Guard.
http://www.youtube.com/watch?v=0V3SqxUomwk

* will be best remembered for playing the title role of the First World War Prime Minister in 'The Life and Times of David Lloyd George', a 1981 BBC Wales drama serial broadcast which featured the haunting music 'Chi Mai', by Ennio Morricone.
http://www.youtube.com/watch?v=gF-qs_jxrH0

* has had various film and tv roles including in 2007 appearing as 'Y Llywydd', The President in S4C gangster series 'Y Pris', where he acts and speaks in his native Welsh.

Here he uses his beautiful Welsh voice to read the Dylan Thomas poem :

Do Not Go Gentle Into That Dark Night
http://www.youtube.com/watch?v=kF-4ynZIgs8