He stands to remind us at a time when we are in danger of elevating Prime Minister Margaret Thatcher to some kind of sainthood in the wake of Meryl Streep's film, 'The Iron Lady', that there were those, like him, in the highest ranks of the Conservative Party who opposed her.

What you possibly didn't know about Norman, that he :

* was born and brought up in London and got his surname by combining that of his Greek born, civil engineer father, Stephen 'Stevas', with the middle name of his Irish mother, Kitty 'St John' O'Connor.

* as a young man he demonstated that he was very, very clever gaining a 'first' in law at Cambridge, an MA at  Oxford, a doctorate at London University and barrister status at the age of 24.

* had flamboyance, demonstrated when he 'coxed' a Cambridge rowing crew in a top hat, white tie and tails but bothered that his dandyish manner meant he would not be taken seriously, once said that  "because I am burdened with a capacity for wit, people have sometimes had the impression that I am not serious in my approach."

* became a Member of Parliament and entered the House of Commons in 1964 and in 1979, became a member of Margaret Thatcher’s first Cabinet as 'Leader of the Commons', where he was never what Mrs Thatcher termed, ‘one of us’, opposing her economic policies and reportedly giving her the nickname 'Tina' from the initials of her mantra : ‘There is no alternative’. 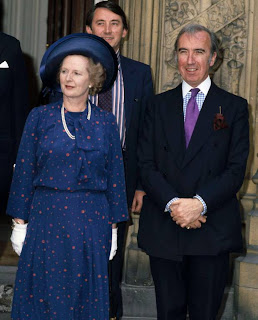 * in his 20 months in the Cabinet, extended the power of democracy in Parliament by inceasing its control over the Government Executive by creating the 'select committee system', which allows backbenchers to interrogate ministers and set up inquiries into controversial issues.

* further antagonised Mrs Thatcher with his references to her as "the Blessed Margaret" and "the Leaderene" and to the aged Lord Thorneycroft, brought back from retirement as Party Chairman, as "a public monument on whom the prime minister has slapped a preservation order" and was sacked by her from his Cabinet post in 1981.

* was sacked from the Cabinet by Mrs Thatcher in 1981, the first of the 'Wets' – Tories opposed to her more hardline policies – to be removed with ‘wet’, public school slang for anyone judged to be 'weak'.

* remained on the backbenches then was made a lord in 1987.

Kenneth Clarke, the Justice Secretary, told the BBC that :
"He was very flamboyant and had a style all of his own, which was very theatrical, but actually he was an intelligent, sensitive man. He was a very, very good minister and he had very, very clear political opinions."

http17265191://www.bbc.co.uk/news/uk-
Lord Strathclyde, Conservative Leader of the Lords, said:
" He was a colourful, deeply spiritual and wise figure whose greatest legacy to the House of Commons remains the select committee" and a "great parliamentarian who would be missed by both Houses of Parliament."

"Norman was a one-off, a very unusual character, combining intellect and academic talent with the realities of politics. He also had a great sense of humour. As a Cabinet minister he used to sit at the far end of the table and it was quite frequent there would be an eruption of laughter from that quarter at something he said.That used to annoy the prime minister [Thatcher] but Norman had the great skill of being able to rephrase a joke to make it sound wholly innocuous."

Prime David Cameron said: "I was lucky to get him in to No. 10 after
becoming Prime Minister to hear his advice. He came to a reception at Downing Street this Christmas and was amongst the last to leave, chatting amiably to young and old alike with his great charm."

Once on he satirical tv programme, 'That Was the Week That Was', was asked by David Frost about the colour of his shirt:
"What's that – purple?"
"No," he replied, "crushed cardinal."
Norman was a life long Roman Catholic by religion.

Bizzarely, a clip of a very old Norman talking about
Monarchy and dubbed into Russsian :
http://www.youtube.com/watch?v=L3ErN1TdHnw&feature=related